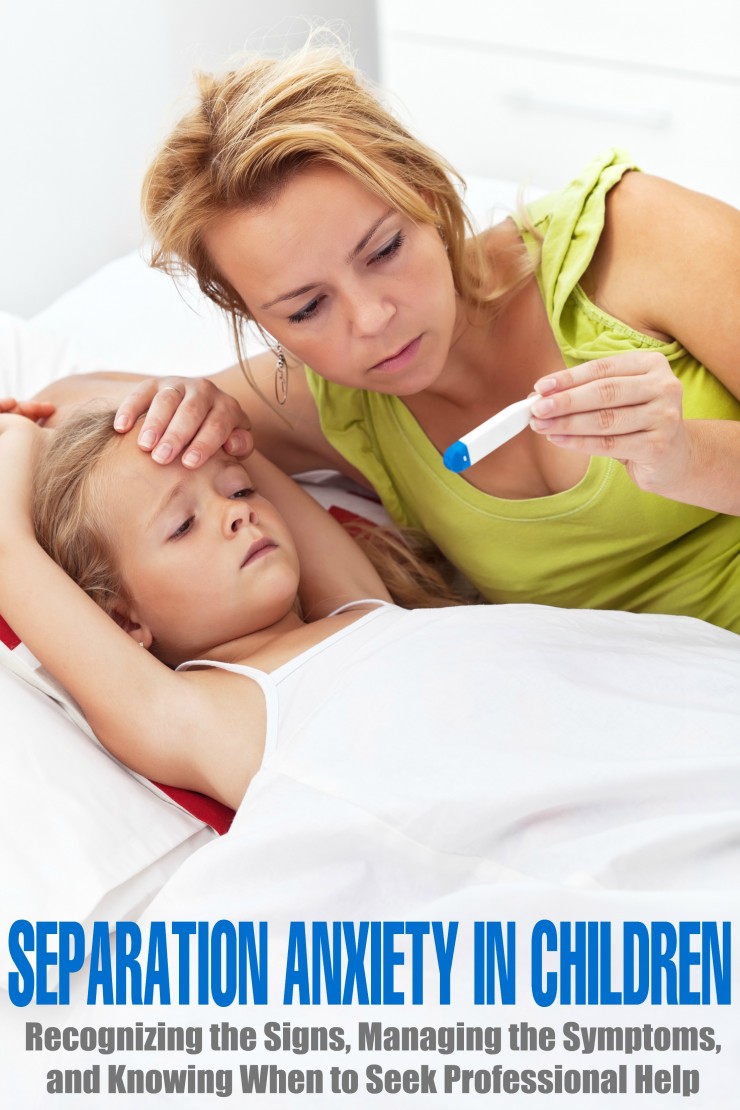 It’s Monday morning, you’re in a rush. Breakfasts are eaten, lunches are packed, and you’re urging the kids to get out the door. Everything seems to be running relatively smoothly, when you hear “mom, my tummy hurts” in a soft, whimpering voice.

You might find yourself thinking “Not again, he was fine a few minutes ago”.

For kids, it’s confusing, for parent’s, it can be frustrating and hard to relate to. So, how do we recognize separation anxiety, and what do we do about it?

Separation anxiety shows up in a number of ways, though there are some common themes amongst symptoms. Primarily, children report somatic (body-based) concerns.

Children might have a more difficult time recognizing the negative and distorted thoughts that come along with separation anxiety, but that’s something you can help them with – more on that soon. Along with the somatic symptoms, and distorted thought patterns, are behaviours that our children engage in when they are experiencing separation anxiety.

Let me give you some examples.

Somatic symptoms that children experience with separation anxiety are likely to include stomach aches, headaches, nausea, and even vomiting (APA, 2013).  Children may also experience nightmares related to the themes of separation (APA, 2013).

Behaviours related to separation anxiety can be diverse, as children can be creative in their attempts to avoid situations. It is a good idea to monitor your own child’s behaviours, to recognize what their specific strategies are. Some examples of behaviours include refusal to go to school or to sleep, fear of being alone in the home or elsewhere, and expressing excessive worry (APA, 2013).

That’s what the American Psychological Association says, but what do these behaviours look like in real life? How does separation anxiety speak through our children?

Refusal to go to school can play out in a variety of ways, as I mentioned above. This might include crying, pleading, or hiding. If a child is fearful, they are likely to express it. They may appear sad, their hearts might be racing, maybe they over or under active.

The most important thing to recognize is that these responses are related to fear, and the body’s fight-flight-freeze system. And although we know that our children are safe, their sympathetic nervous system is telling them otherwise. What this means is that our children feel danger, as if it were actually there, even when it’s not. One reason that this may be so confusing for children (and for parents too!) is that we haven’t taught them about this fight-flight-freeze response that keeps us safe in times of actual danger.

Our bodies, in fight-flight-freeze mode, literally do not know the difference between actual and perceived danger. To exaggerate this point, imagine that you are in the wilderness, and being chased by a bear. What might your response be? To run as fast as you can? How would your body feel?  Energized, tense, your breath is likely to be short, and your heart is likely beating very quickly in that situation. These exact responses happen in our children when they experience separation anxiety. Truly, their brains, at the most primal level, do not know the difference between being separated from their caregivers, and being chased by a bear. And so, it makes sense for their little bodies to react in this way. Note – this happens to adults too.

So, now that we are all a little more educated on fight-flight-freeze responses, how do we help our children when they experience this symptoms?

As you can imagine, this can be a very scary experience.

In dealing with the somatic symptoms related to separation anxiety, we can teach children to calm and soothe themselves, and bring their bodies back to a resting state. There are many ways to do this, which give you as a parent a great opportunity to role model some healthy coping strategies. One way, is to use breathing.

Breathing can be done in a variety of ways, and I encourage you to use your imagination. When we are anxious we take quick, short breaths into our upper chest, rather than our lower chest and stomach. By taking nice big breaths into our stomach, we can convince our nervous system that we are in fact safe, and calm down the rest of our body. Maybe you could have your child imagine blowing up a floating device for a swimming pool. This would require them to take a big breath in, and exhale as much as they can.

The first step in dealing with the behaviours related to separation anxiety is recognizing what those behaviours are. As I said previously, children are creative, and the behaviours can be diverse. As the parent, you know your child best, and I am guessing you may be reading this, because some of these behaviours are interfering with your child’s, and maybe your life. Behaviours that your child engages in to cope with separation anxiety can present both at home and at school, and may also be tied into the thoughts that the child is having. One example could be a child hiding when it is time to get ready and go to school.

When it comes to thoughts, we can help our children challenge their negative thoughts, rather than giving into them. For example if a child is continually asking when the parent will be home, the parent may be inclined to reassure the child over and over again what time they will be home. Conversely, the parent could remind the child of what they were told when they asked the same question a few minutes ago. The latter is more likely to break the cycle of negative thoughts that the child is stuck in.

When to Seek Professional Help

It is important to recognize these behaviours, and when you may want to seek out the help of a professional psychotherapist. Recent research has correlated a diagnosis of separation anxiety in childhood, with panic attacks and other anxiety related disorders in adulthood (Kozzowsky, Pfaltz, Schneider, Taeymans, Locher, & Gaab, 2013), making it especially important to understand and manage separation anxiety in children.

So, how do we know when it’s time to get help from a professional counsellor?

According to the American Psychological Association, a diagnosis of Separation Anxiety Disorder could potentially be made if the symptoms discussed here previously occur for a period of at least 4 weeks in children and adolescents (APA, 2013).

Therefore, if the symptoms and behaviours last for a period of more than 4 weeks, it may be a good idea to check in with a professional.

Further, the symptoms must impact the child’s social, academic, or other important areas of functioning to a clinically significant degree, as can be determined by a practitioner, in collaboration with parents. This is not to say that a diagnosis is necessary, and it is important to consider the long term impacts of your child being given a diagnosis – as these labels tend to stay on records for a very long time.

Seeking professional help also does not mean that a diagnosis will be made. A therapist can help to get at the core of the problem, and work on where it came from, so that it may no longer be distressing for the child. A therapist can also help your child learn better ways to cope with the somatic symptoms, behaviours, thoughts, and emotions associated with separation anxiety.

Thanks for the article! I thought separation anxiety was only present in babies. This was new to me!