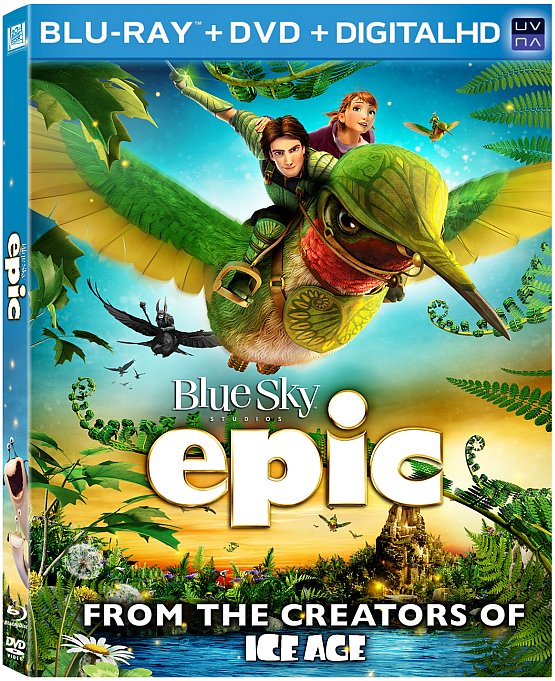 EPIC tells the story of an ongoing battle between the forces of good, who keep the natural world alive, and the forces of evil, who wish to destroy it. When a teenage girl finds herself magically transported into this secret universe, she teams up with an elite band of warriors and a crew of comical, larger-than-life figures, to save their world…and ours.

Aside from the main feature the Blu-Ray & DVD  comes with several great special features but your kids will especially love the included  Colouring Book App which allows you to create their own Epic story and share it with family and friends.

EPIC is based on William Joyce’s book The Leaf Men. It plays like an updated version of “Fern Gully: The Last Rainforest” right down to having a star studded voice cast and definitely sways to the side of unoriginal for those who have seen similar nature-nurturing themed films.  That said, this is a great film for younger kids who will be able to easily connect the dots laid out in the plot.  For example, Queen Tara and her “leaf men” soldiers represent growth while Mandrake and his “boggan” troops represent decay.

Visually, EPIC captures the vibrant beauty of the lush forest with sweeping CGI effects.  The stunning visuals really saves the movie for older viewers as the characters zoom around on the backs of Hummingbirds.

Disclosure: I received a copy of the DVD in order to facilitate this review.  All thoughts and opinions remain honest and my own.

The graphics of this movie look incredible.

My great grand daughter has this DVD and she likes to watch it all the time. She likes it when the girl is shrunk and rides the hummingbirds

We really want to see this movie!

We really enjoyed this movie in the theatres and would like to watch it again!