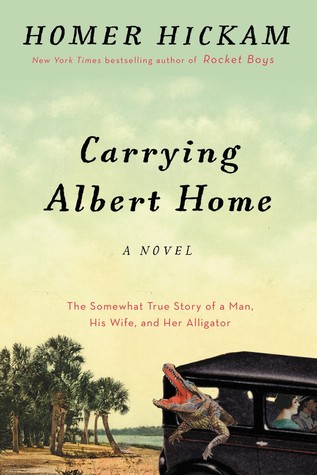 Carrying Albert Home tells the sweet, funny and sometimes heartbreaking tale of a young couple and their special pet on a crazy 1,000-mile journey. Told with the warmth and down-home charm that made Rocket Boys a beloved bestseller, Homer Hickam’s rollicking novel is truly a testament to that strange and marvelous emotion we call love. Request your exclusive interview today with Homer about “the somewhat true story of a man, his wife, and her alligator.”

Elsie Lavender and Homer Hickam Sr. were high school classmates in the West Virginia coalfields, graduating just as the Great Depression began. When Homer asked for her hand, Elsie instead headed to Orlando where she sparked with a dancing actor named Buddy Ebsen (yes, that Buddy Ebsen). But when Buddy headed for New York, Elsie’s dreams of a life with him were crushed and eventually she found herself back in the coalfields, married to Homer.

Unfulfilled as a miner’s wife, Elsie was reminded of her carefree days in Florida every day because of Buddy’s unusual wedding gift: an alligator named Albert who lived in the only bathroom in their little house. Eventually Homer gave Elsie an ultimatum: “Me or the alligator!” After giving it some thought, Elsie concluded there was only one thing to do: carry Albert home.

What a read! This is an engaging, entertaining and touching story filled with quirky, unique characters.  It reads more like fiction than a memoir and will leave you wondering just how much of a fish tale it is. It manages to be both over-the-top fantastical and unbelievable while still feeling surprisingly and convincingly true.

With Albert’s help, Homer and Elsie get involved in adventures that just seem to keep coming.  All the while accompanied by a nameless rooster for no apparent reason, except perhaps, Kismet.

I found Homer to be particularly endearing, what a sweet and loyal man!  Elsie was somewhat frustrating at times but also strangely relate-able and I found myself rooting them on.  As I neared the end I found myself hoping for photos and when I found them, I found myself tearing up.  It almost felt like I was looking back at photos of long lost friends. I came away from Carrying Albert Home feeling completely invested in the “characters”.  What a read, indeed.

This is the first Homer Hickam book I have read and I found myself really enjoying his easy, approachable and engaging writing style so I look forward to checking out some of his other betselling books.

I think it goes without saying that I recommend this novel, this is a must read!

Going to order this one,after telling my granddaughter about she is excited to read this story