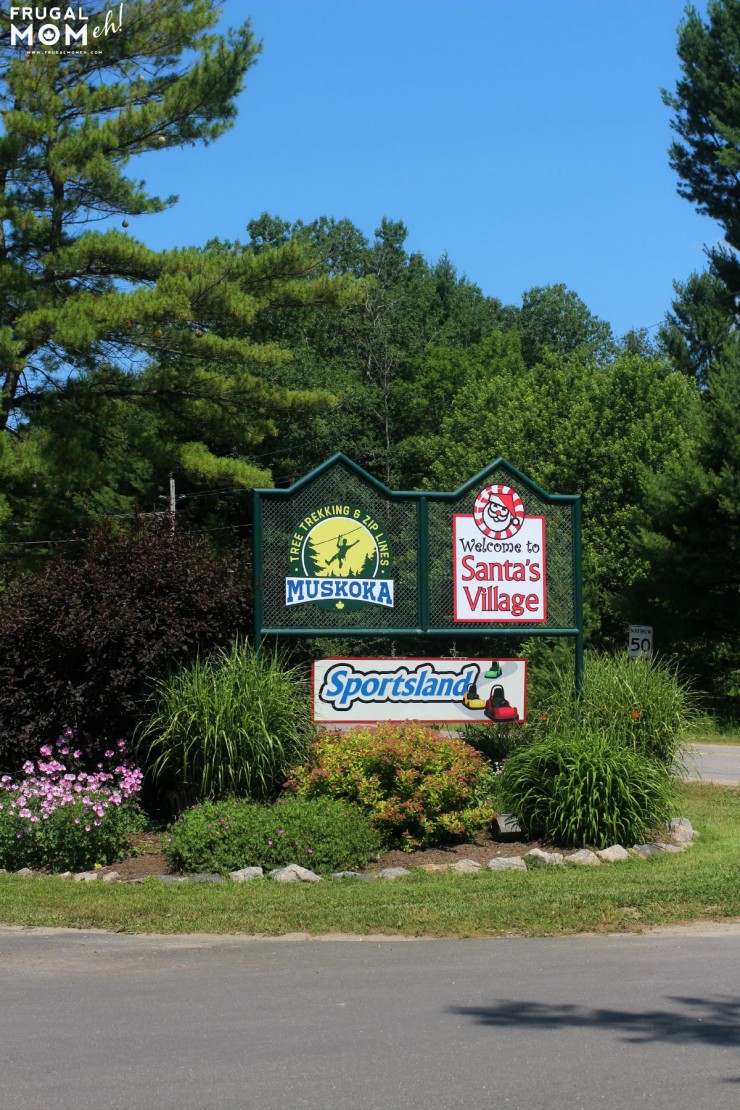 Summer is my favourite season, I can’t get enough of the long hot days, and they seem to pass by so quickly.  To make the most of the shortest Canadian season (well, it seems that way to me at least), we’ve been really busy with the girls.

Our latest adventure was a short drive to Bracebridge, ON to visit Santa’s Village Family Amusement Park. 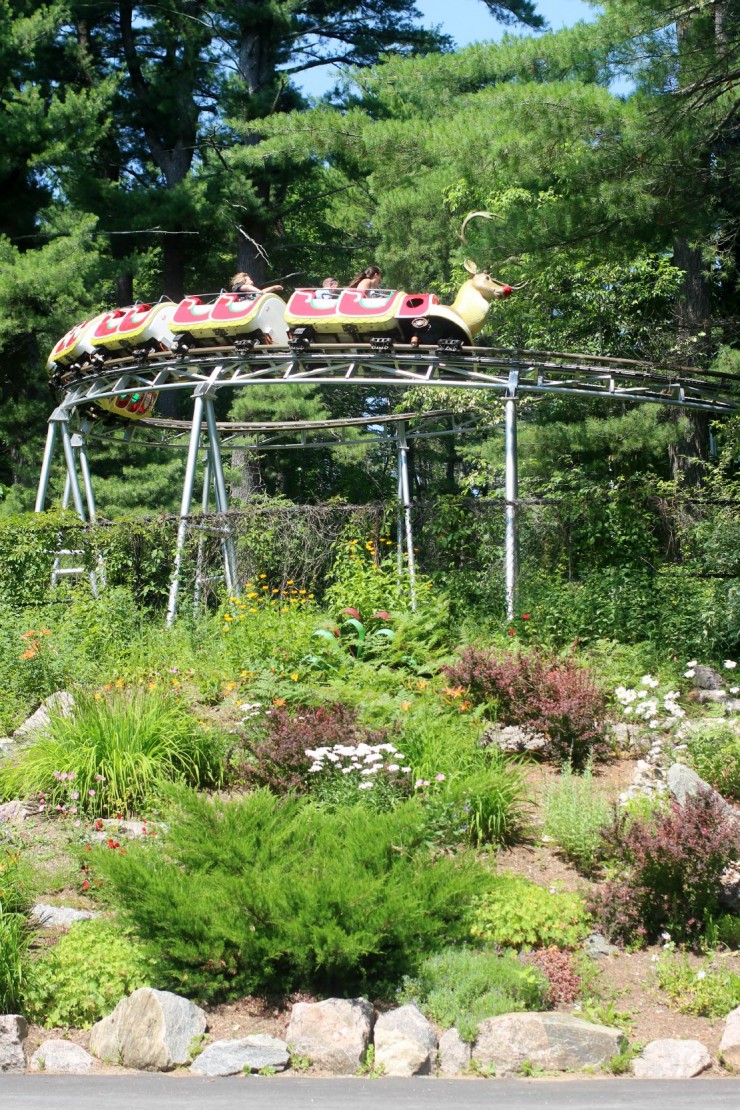 This year marks the 60th Anniversary of this iconic family amusement park.  60 years is incredible and in that time the park has changed and grown but one thing hasn’t changed – it is still full of fun!

Bracebridge just celebrated over the weekend with the very first SantaFest which included a parade, competitions and plenty of family fun.  There is a lot of interesting history behind the creation of Santa’s Village – including the fact that it was originally a community project and originally featured fairy tale and nursery rhyme characters. 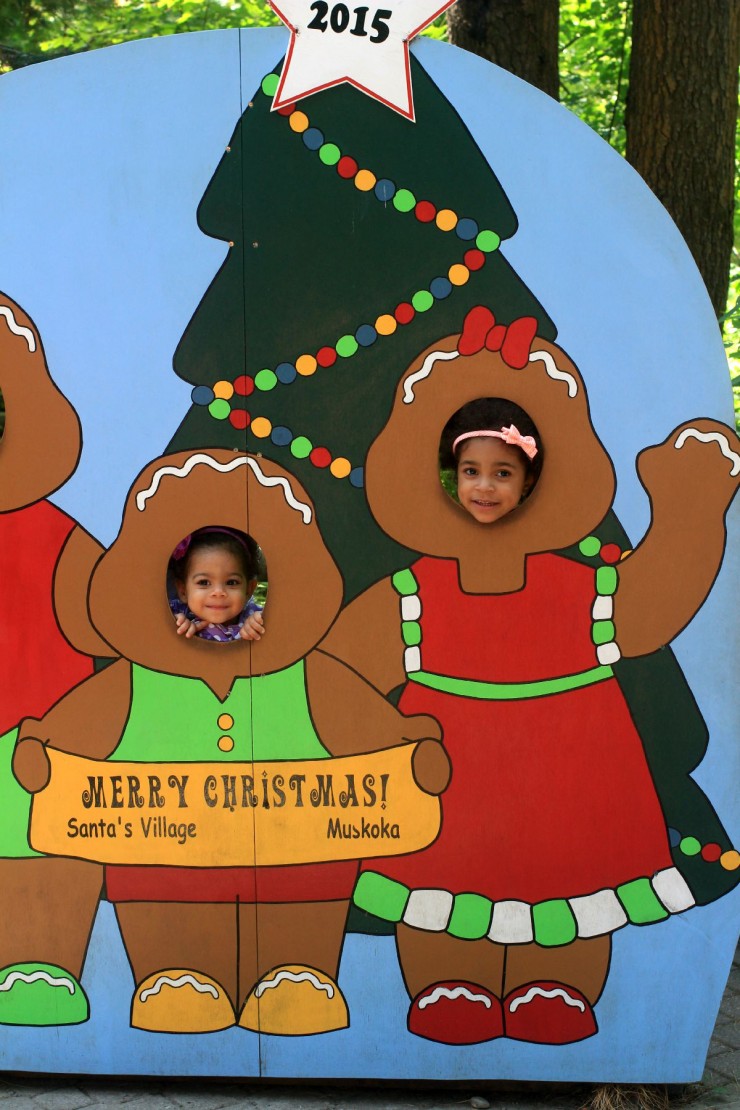 Nestled in Muskoka’s Enchanted Forest, halfway between the North Pole and the equator on the 45th parallel, it is – naturally – Santa’s summer home of choice.  Santa’s Village is a place where kids of all ages can visit Santa, enjoy rides, games, and countless other family-friendly activities. 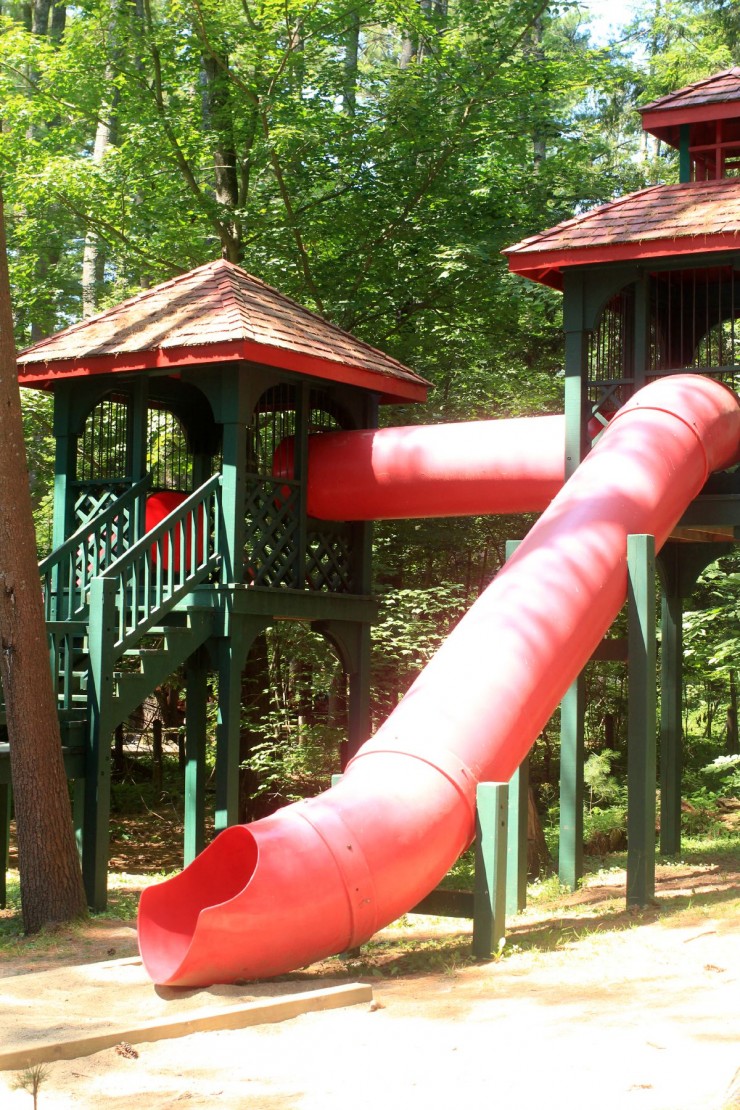 There is fun for every age at Santa’s Village and it ranges from the roller coaster to something as simple as a set of slides. 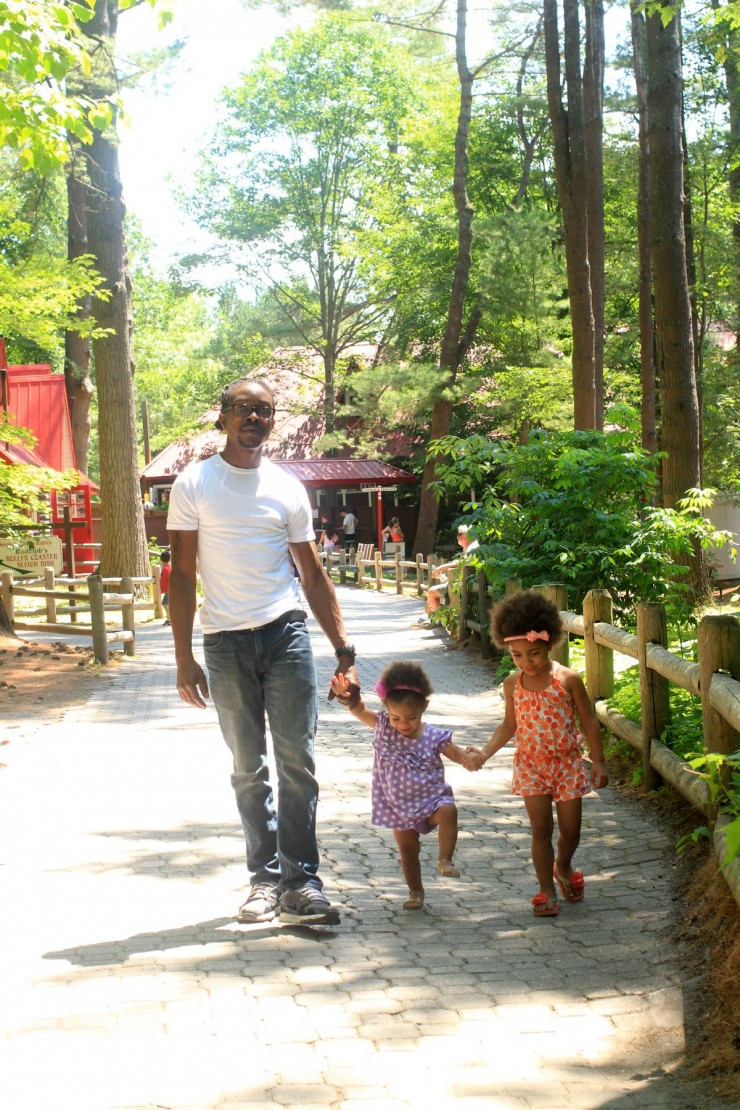 The atmosphere is magical – fresh air, the forest and plenty of Christmas themed decor.  It’s hard not to skip as you walk along from adventure to adventure. 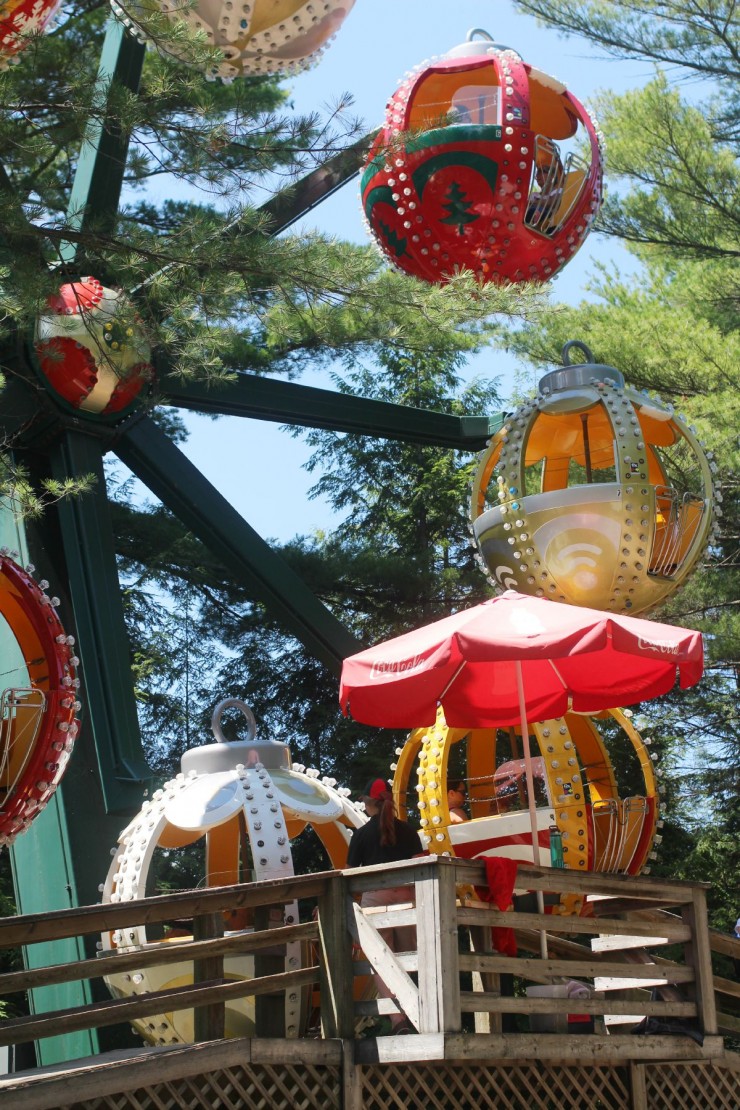 The Christmas Ball Ferris Wheel is a great way to reach the tree tops and get a view of part of the park.  I have to admit that this one had me pretty nervous but my 3 year old didn’t want to get out, she loved it! 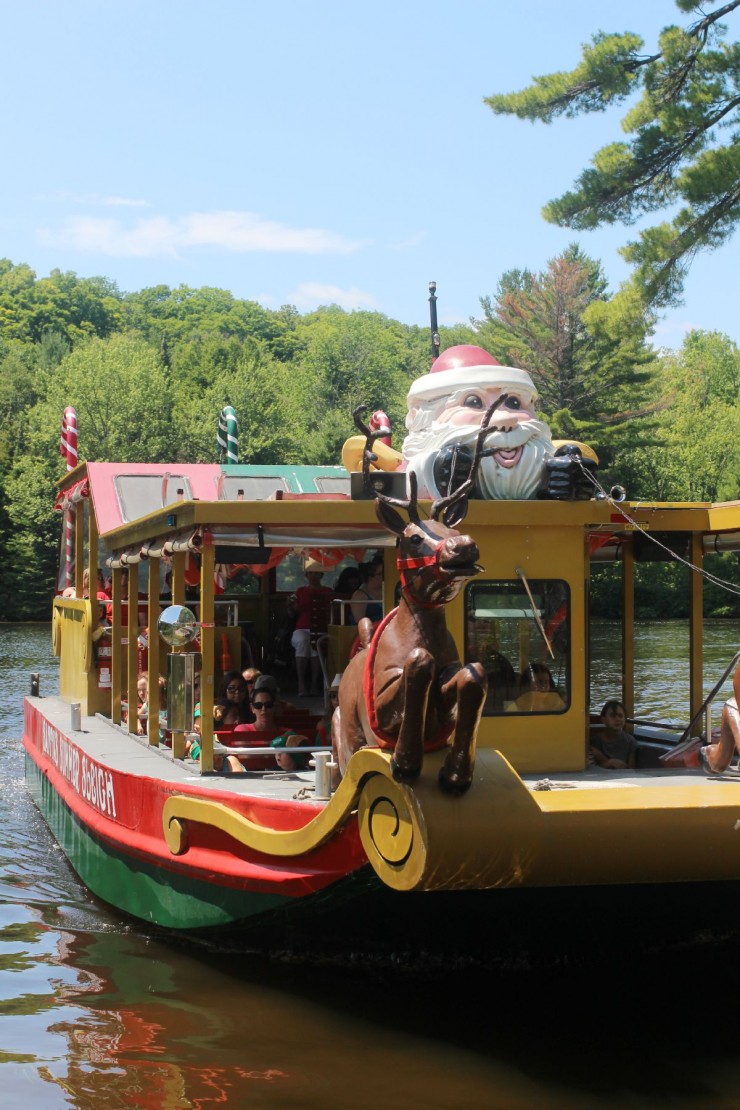 My favourite attraction in Santa’s Village is the ride on Santa’s Summer Sleigh up the Muskoka River.   This is a really enjoyable riverboat cruise and it’s one of the rides the whole family can enjoy together.  We actually ended up going on it twice because we all loved the cruise so much! 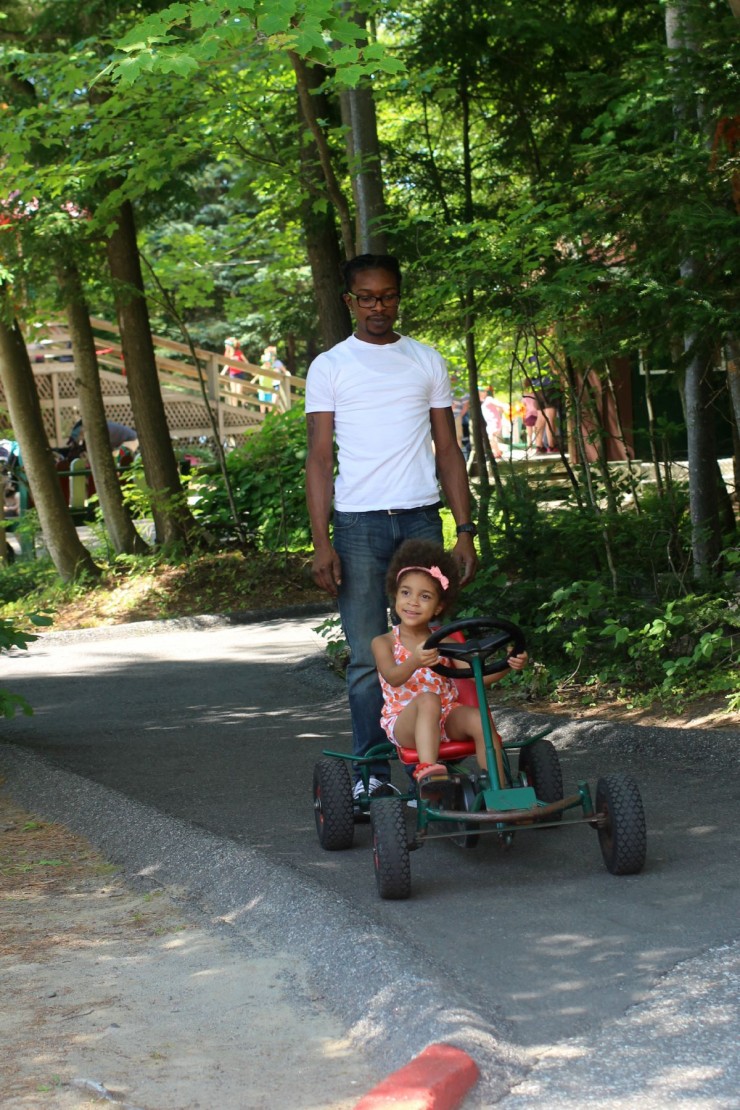 The ATV peddle carts were a little beyond my 3 year old, Keira.  To be fair she thought they were supposed to drive themselves and didn’t realize she needed to peddle.  Daddy to the rescue! 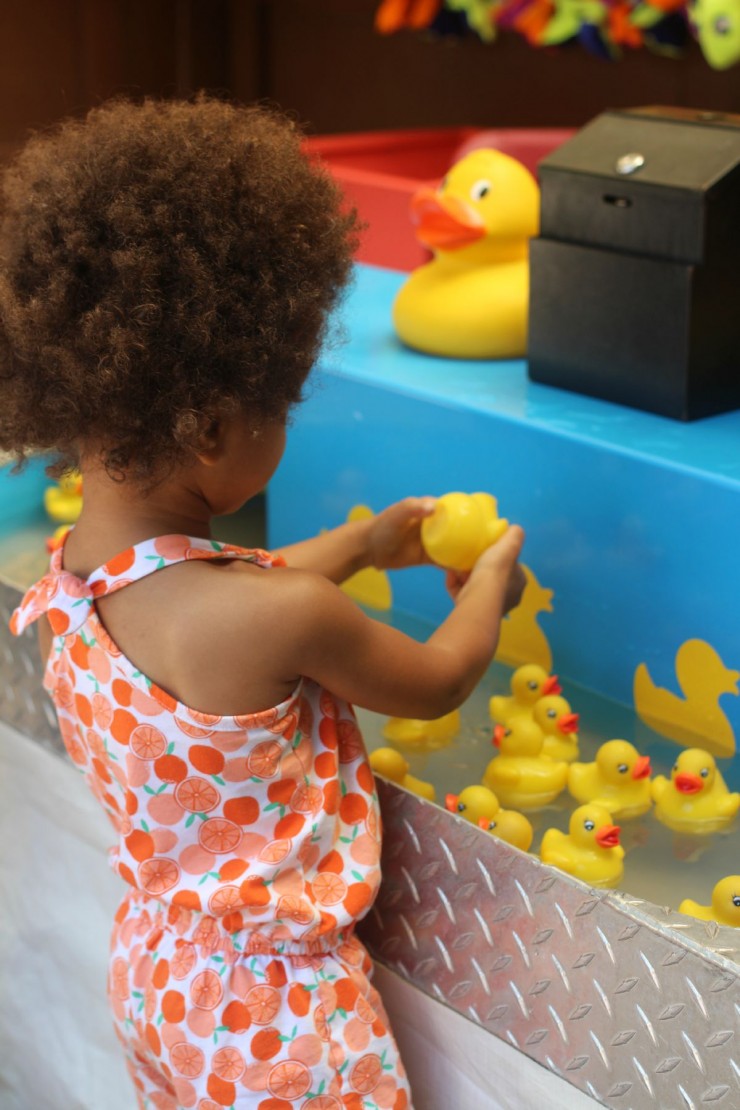 There are plenty of games around the park with prizes too and there is a winner guaranteed every time which is great for little ones. 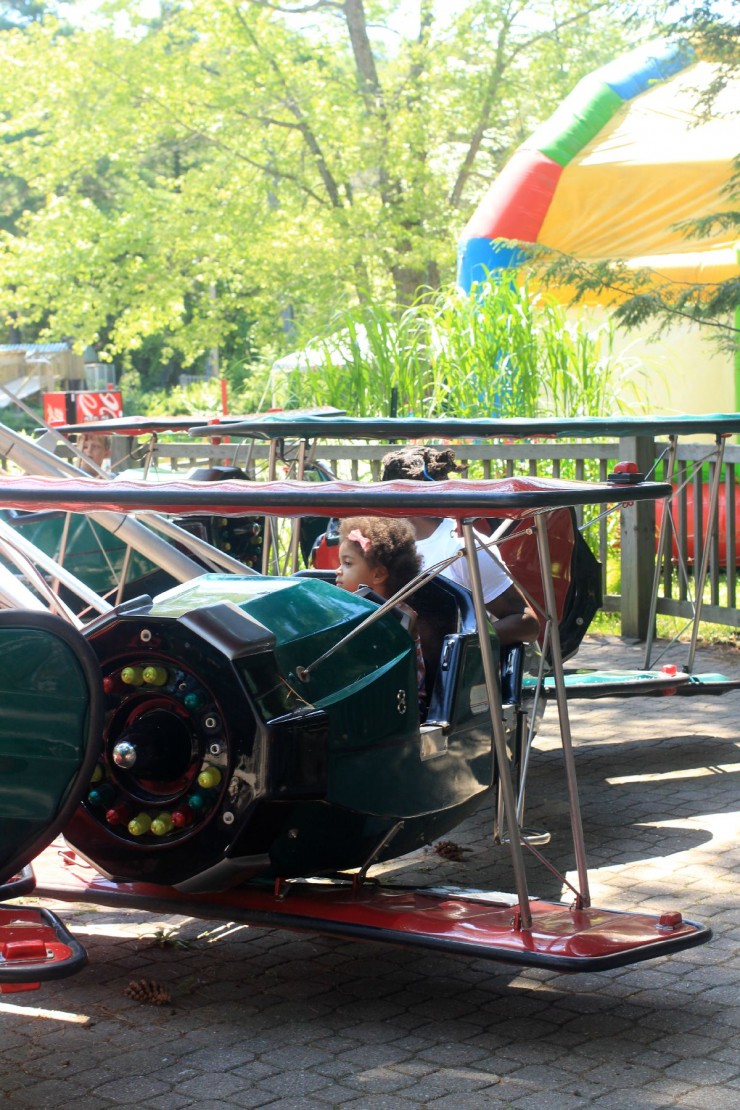 A classic ride that can still be found at Santa’s Village is the Red Barron Bi-Plane Ride, this is one that I rode on as a kid and it’s a ton of fun. 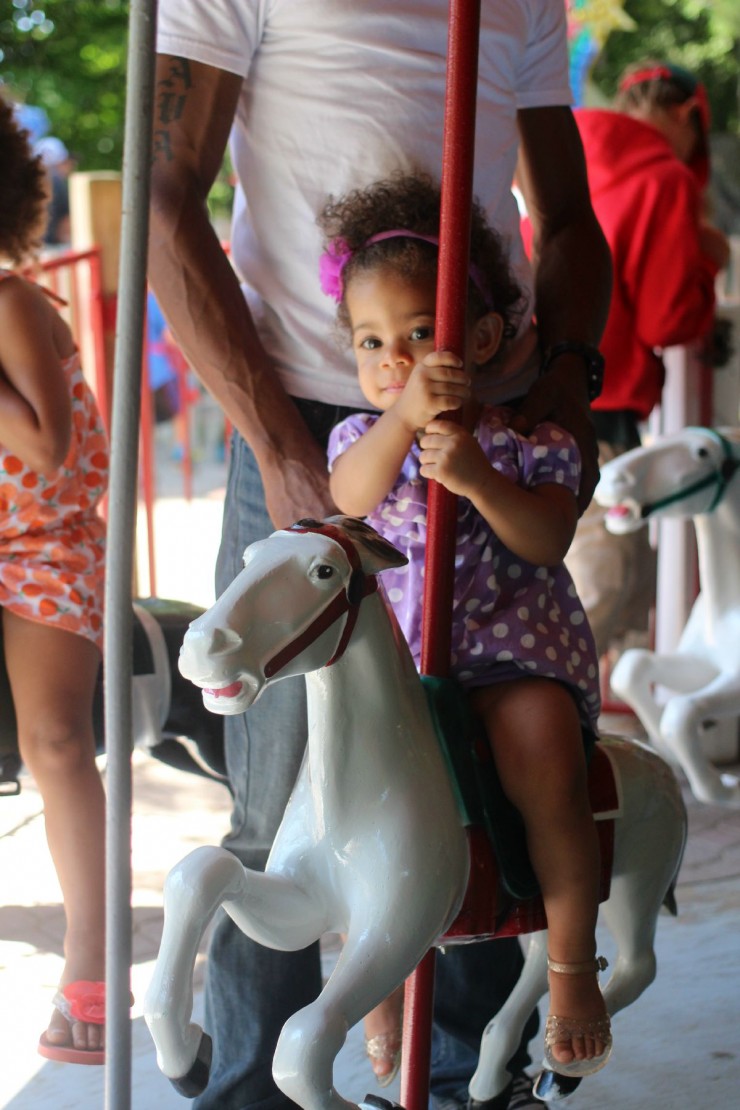 Another ride from my childhood is the Carousel.  I actually have a photo of my sister on a white pony just like this one in the 1980s. 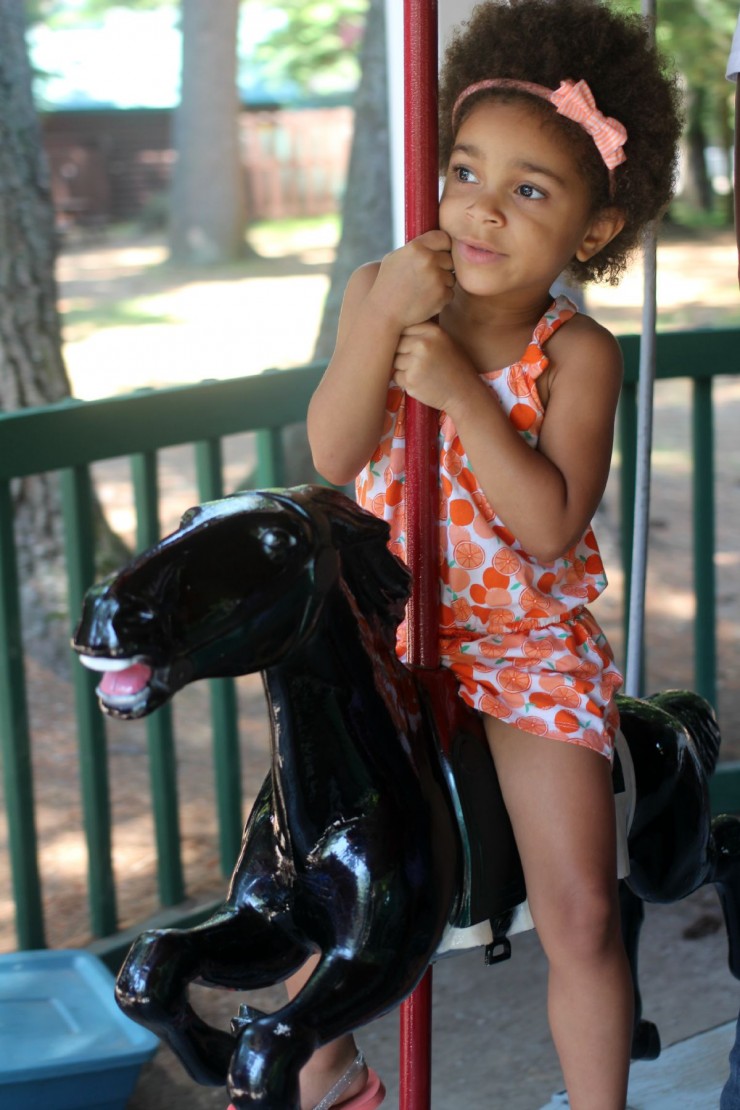 This carousel runs nice and slow and the horses are at a good height so that toddlers and younger children can ride in safety. 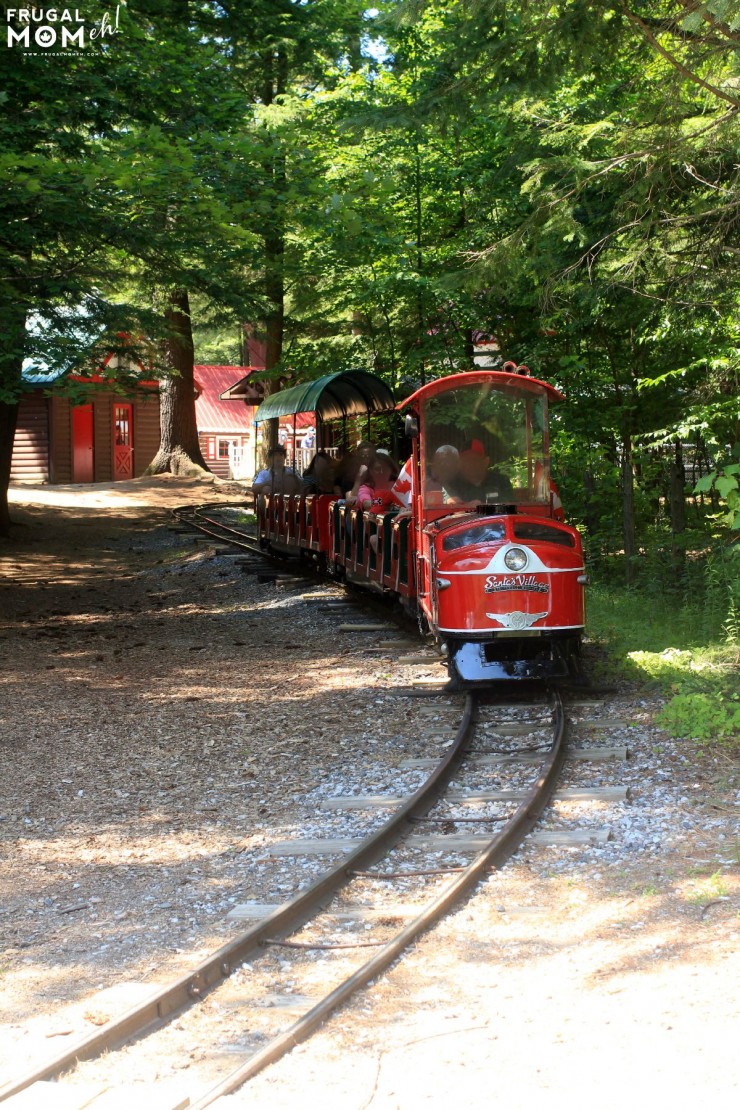 One of the most iconic rides in the park (aside from Santa’s Sleigh) is the train.   This is another ride we enjoyed a few times because again we could all ride and enjoy it together as a family of 4.  It’s also a great way to take a look around the Village and the line goes quickly when there is one!

Hidden along the way are various sights like the rope to China, and the largest gold nugget in the world.  See if you spot them when you take a ride! 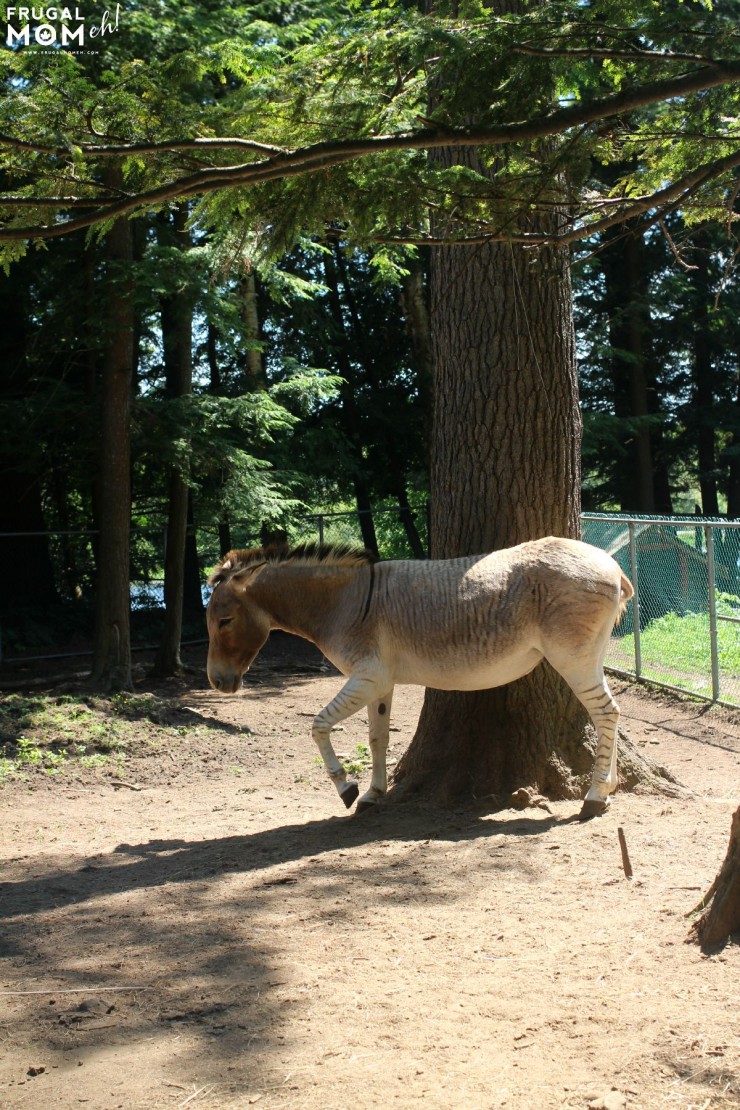 Stop in at Santa’s farm and see goats, Llama’s and even such curiosities as a Zedonk (Donkey- Zebra mix). 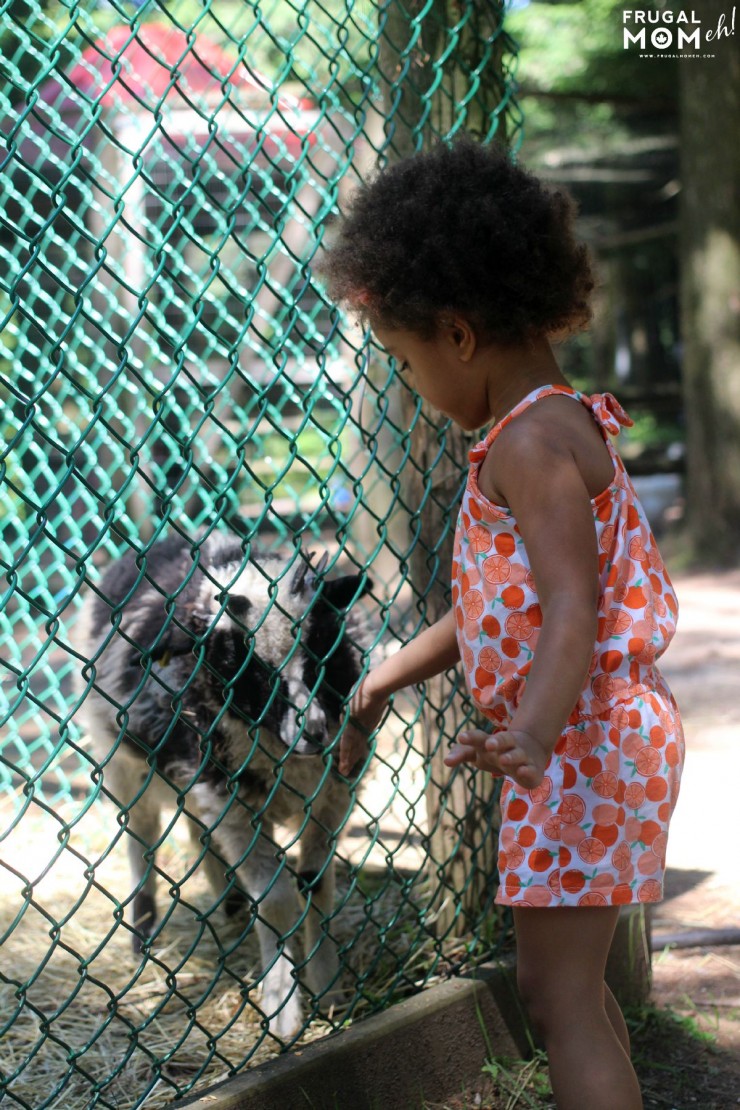 Kid’s of all ages will love the opportunity to feed the animals – something my 3 year old and 18 month old couldn’t get enough of! 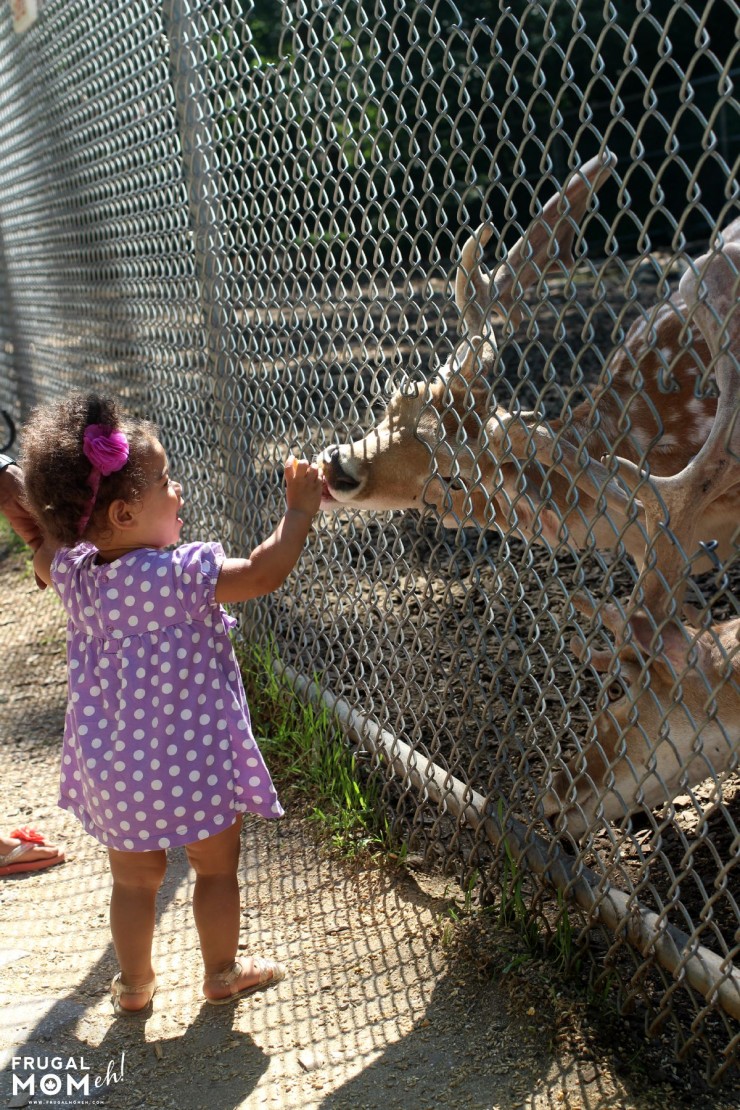 There is also a seperate area where Santa’s reindeer can be found.  Be sure to bring change as reindeer feed is $1 for an ice cream cone full. 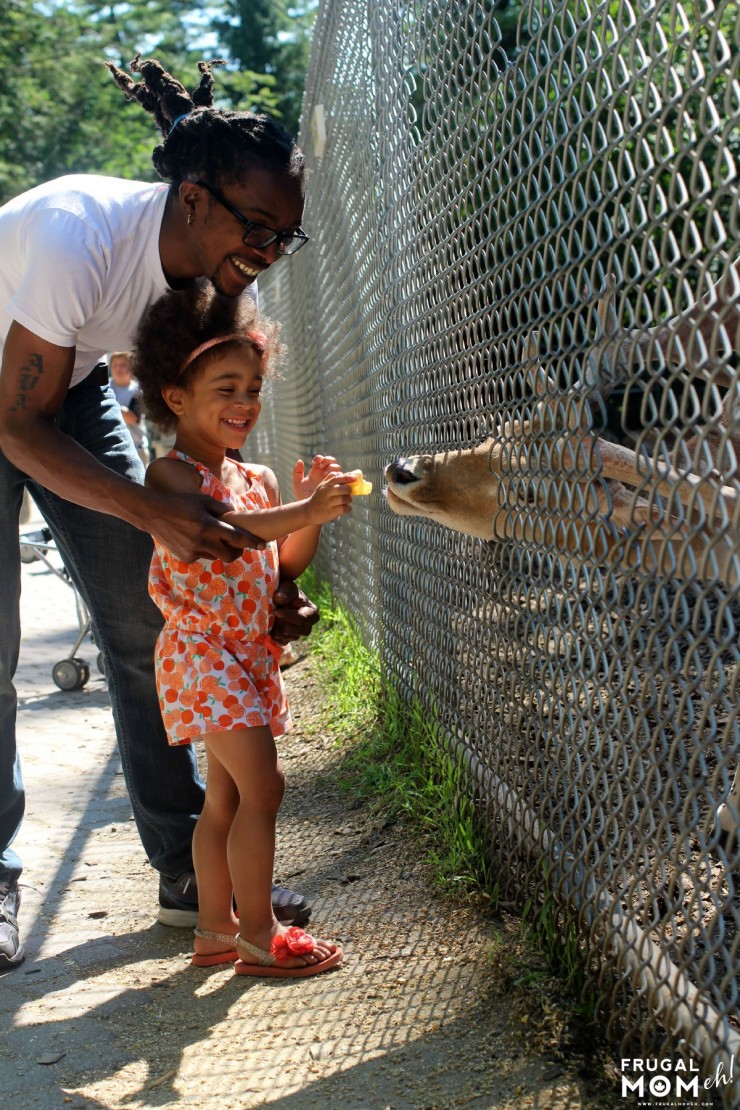 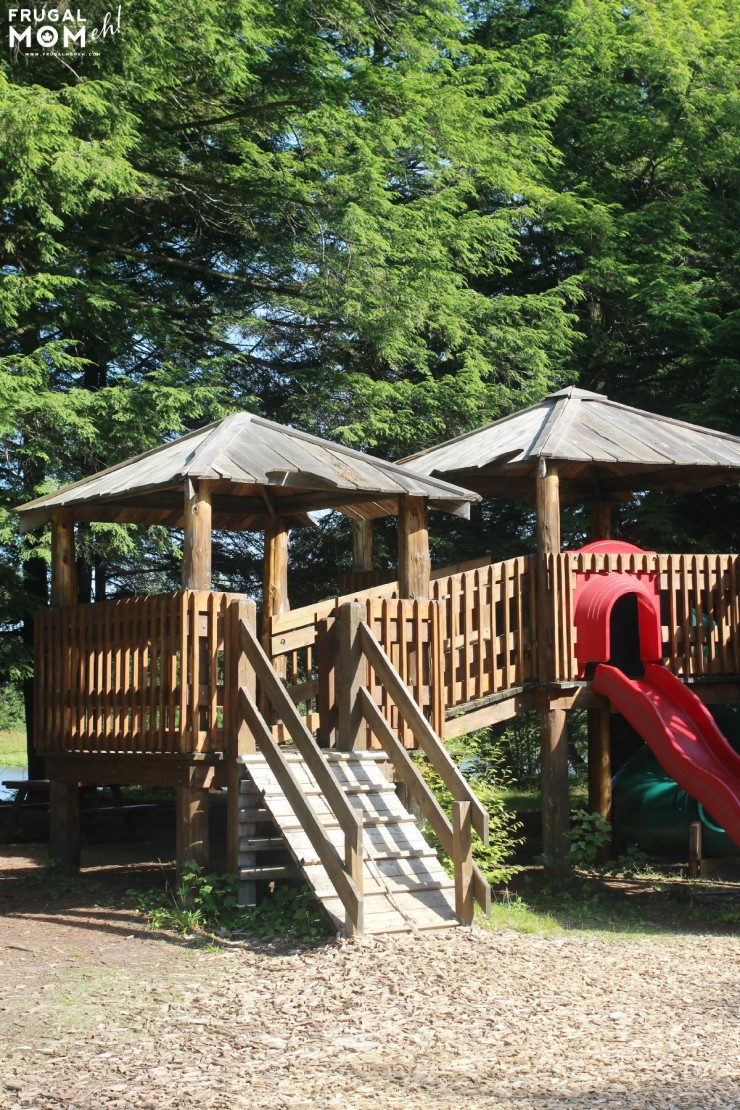 I noticed that although you are right in the forest and along the Muskoka river the bugs are really minimal.  I didn’t spray us and we came out bite free which was nice.

The park has never been crowded when we’ve gone so lines are minimal and the environment is pretty calm for such a fun place!  I also always notice how friendly and helpful the staff are from the ride attendants right  up to Santa himself. 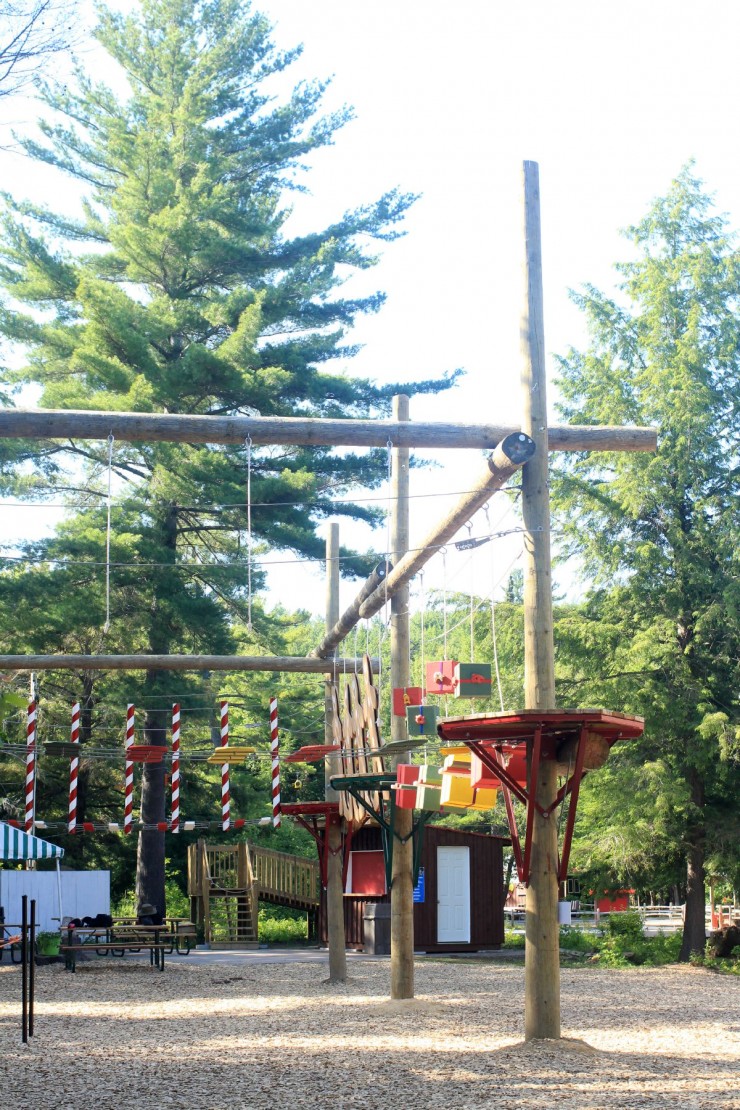 New this year is the children’s aerial adventure park on Elves Island.  It’s a low-level aerial course with various Christmas themed obstacles to challenge their abilities.  It is meant for children as young as 3, it’s a really safe environment that the kids were clearly enjoying. 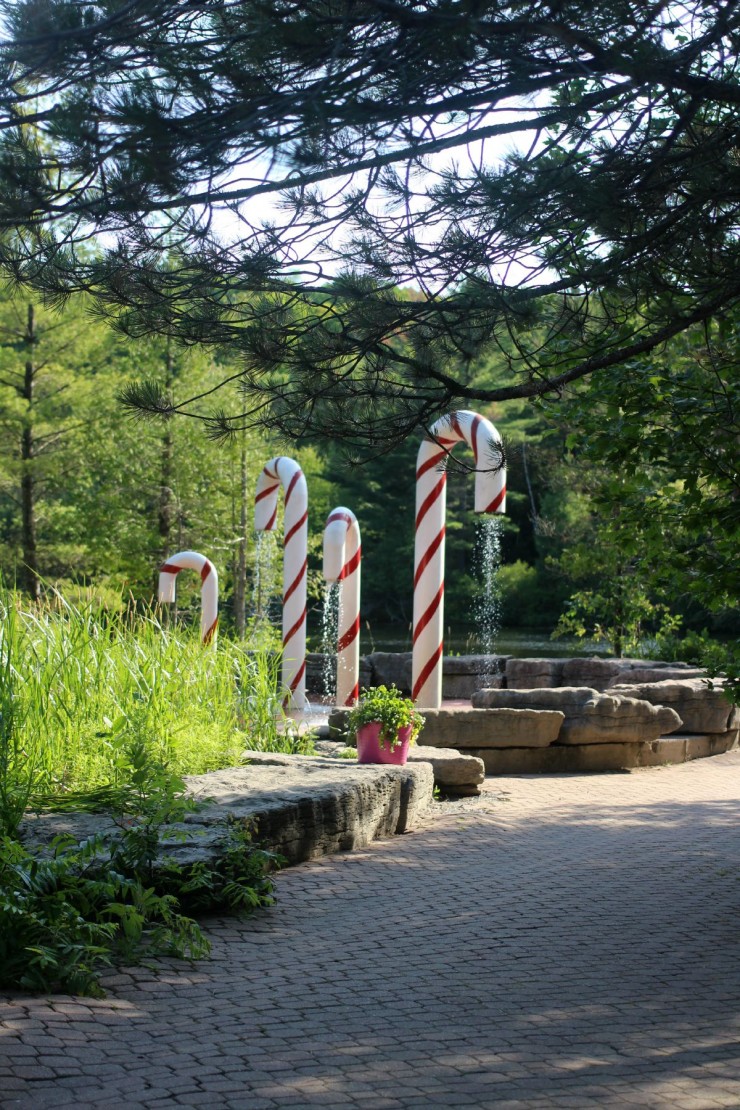 There is also a water pad, Christmas themed of course for kids to run though. 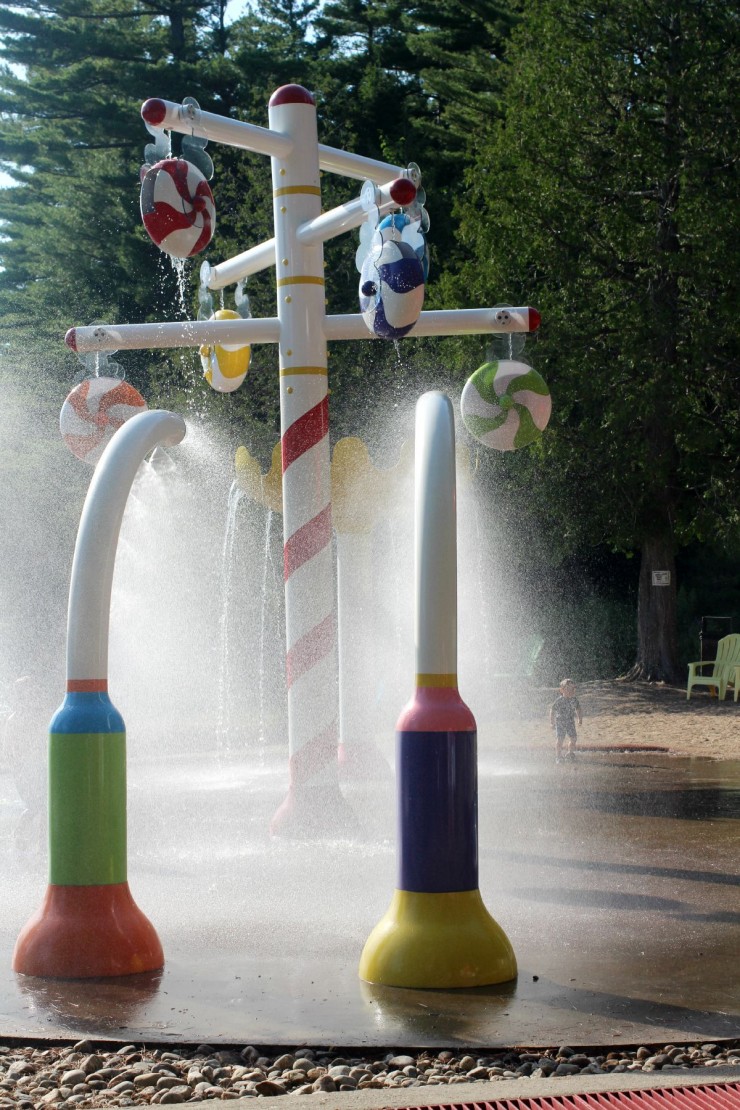 The girls really loved the spray and play beach pad though, just off the candy cane water pad. 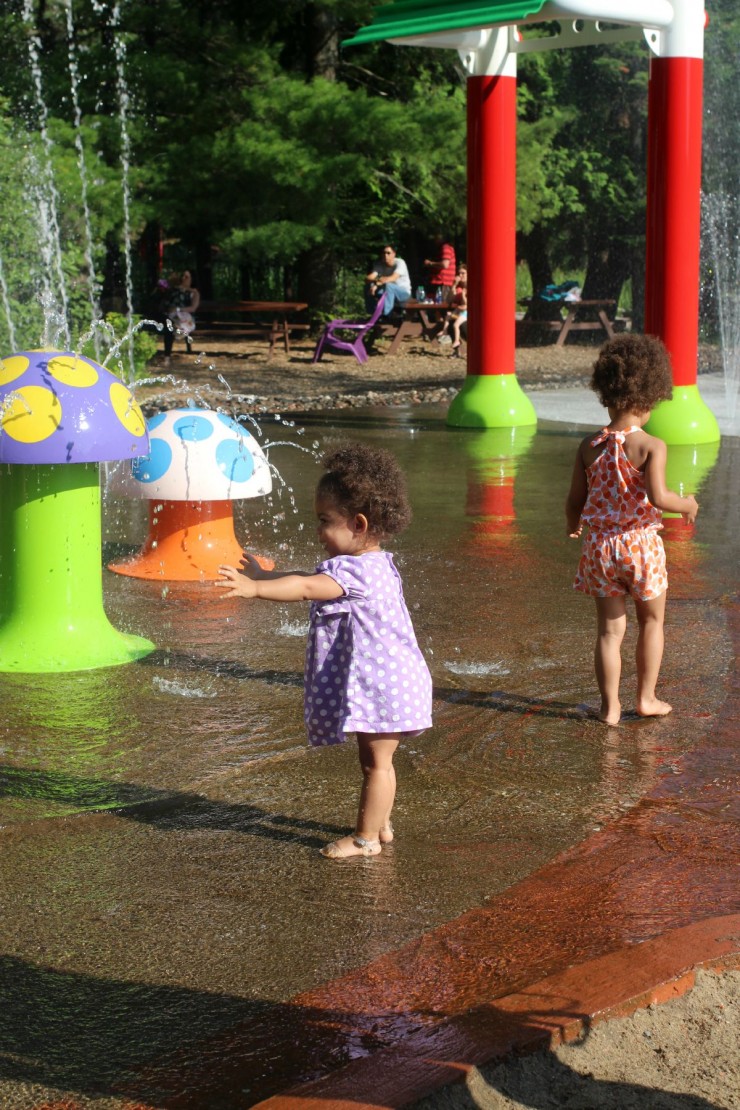 It’s a lot of fun for kids of all ages and the perfect way to get your kids to cool off on a hot summer day. 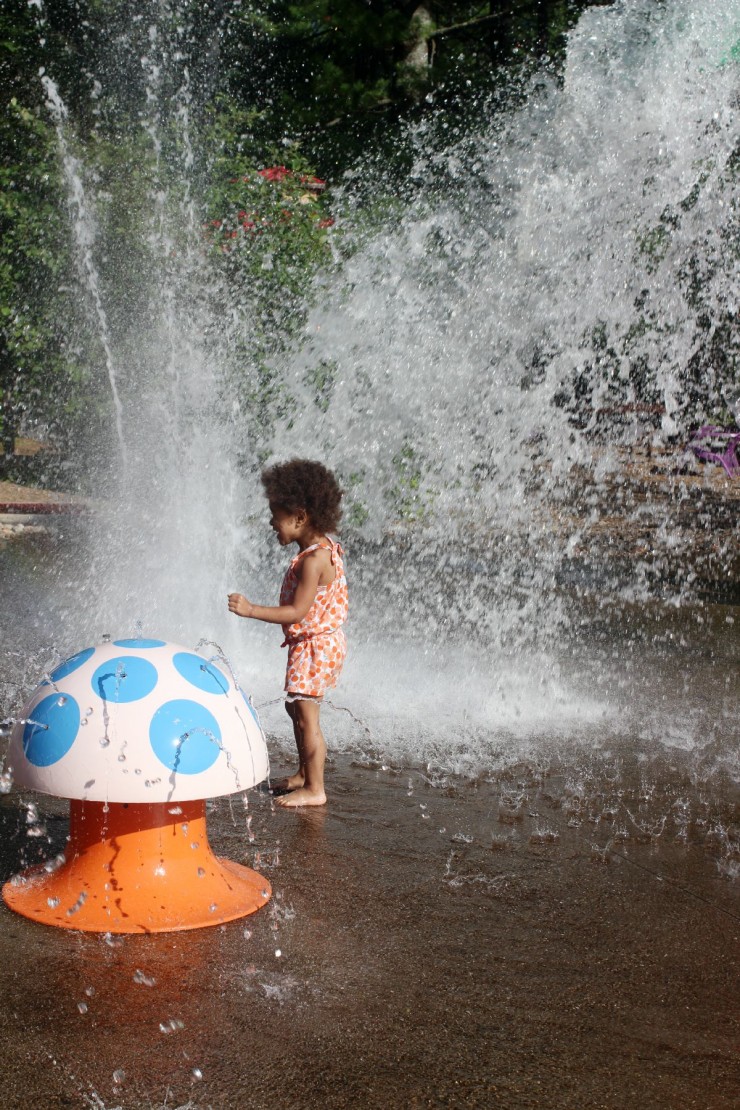 The best part though?  Watching your little one get surprised by water suddenly dropping right beside them. 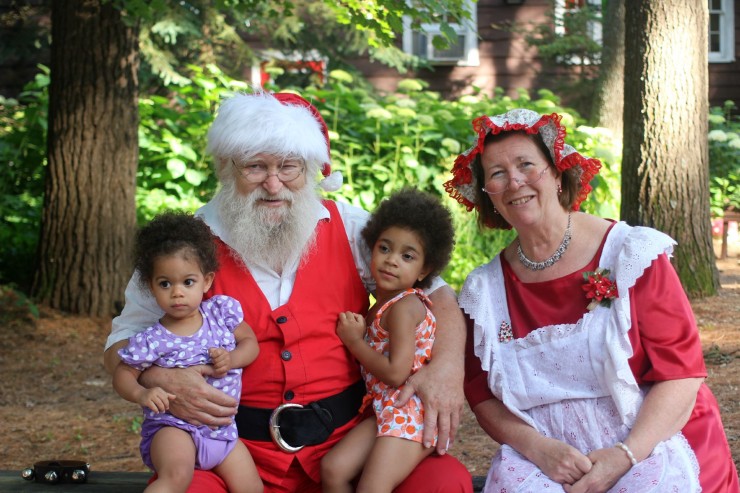 A trip to Santa’s Village just wouldn’t be the same without a visit with Santa and Mrs. Claus!   If you miss him at Santa’s house, you can always catch him at the front of the park.

Elf hats are given out to all children by Santa & Mrs. Claus.  There is also Free coffee or tea for the adults at Mrs. Claus’s bakery – where kids are also to decorate cookies!

Of course Santa’s Village is a day trip so it is important to note that there is a fairly good range of food available from Pizza Pizza (Pizza, Hotdogs, Hamburgers, Chicken nuggets), Santa’s sandwich shop, and Beavertails are available as well as a picnic area in Sportsland in case you want to bring your own. 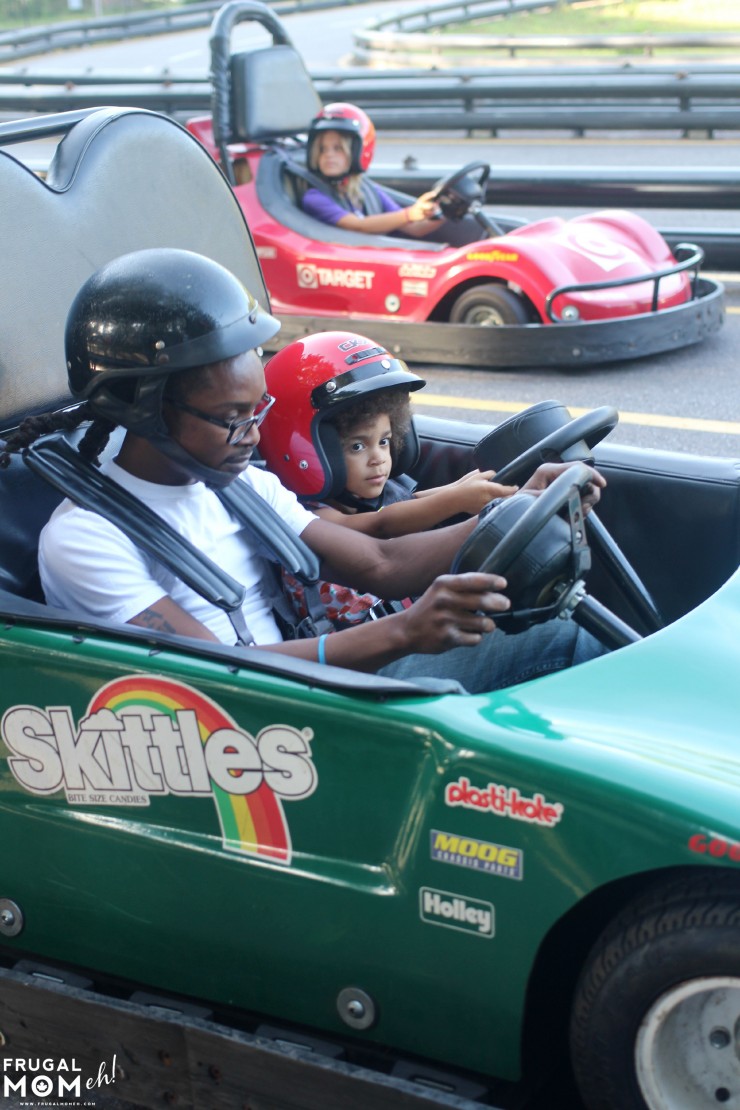 Like I said, there is fun for all ages to be had.  Don’t forget to stop in at Sportsland – Keira and my husband had a blast driving around in the go-carts. 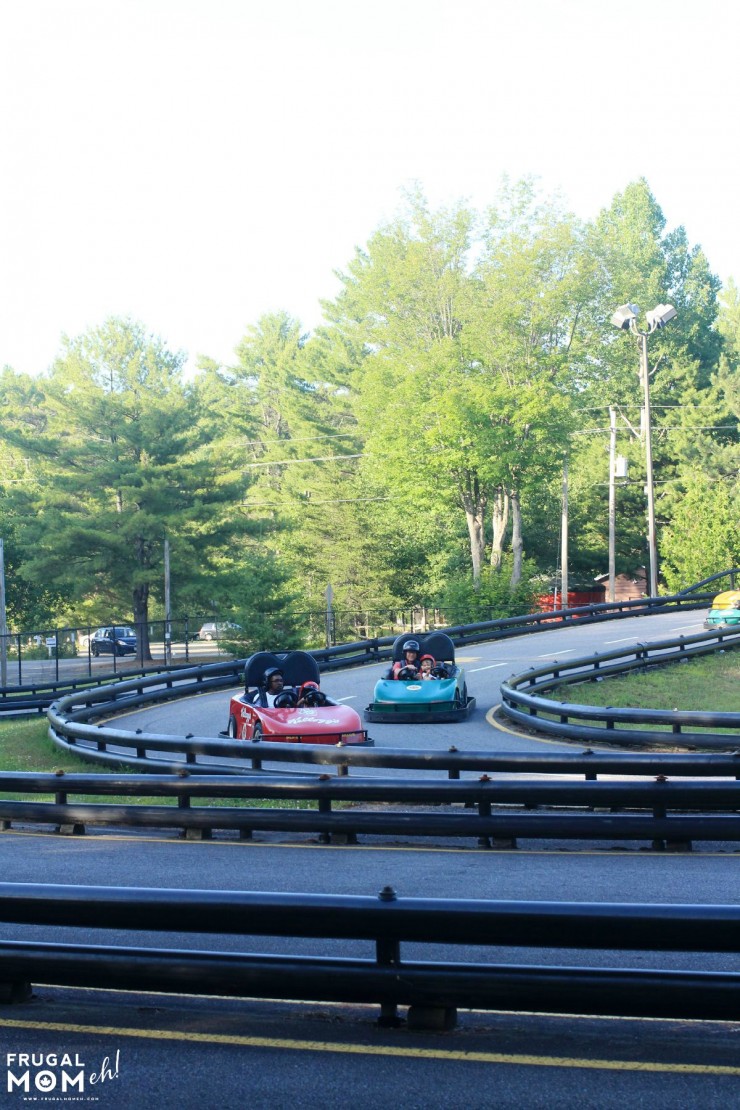 The track is comparable to one we have here in the city and the cost for tickets is actually a lot more affordable than what it costs here.  There are plenty of single and double cars so older children or teens can ride on their own if desired.  This was a super popular attraction and for a reason.  It’s a blast! Keira and my husband couldn’t get enough and I was only able to tear them away after their 3rd go at it because it was getting late. 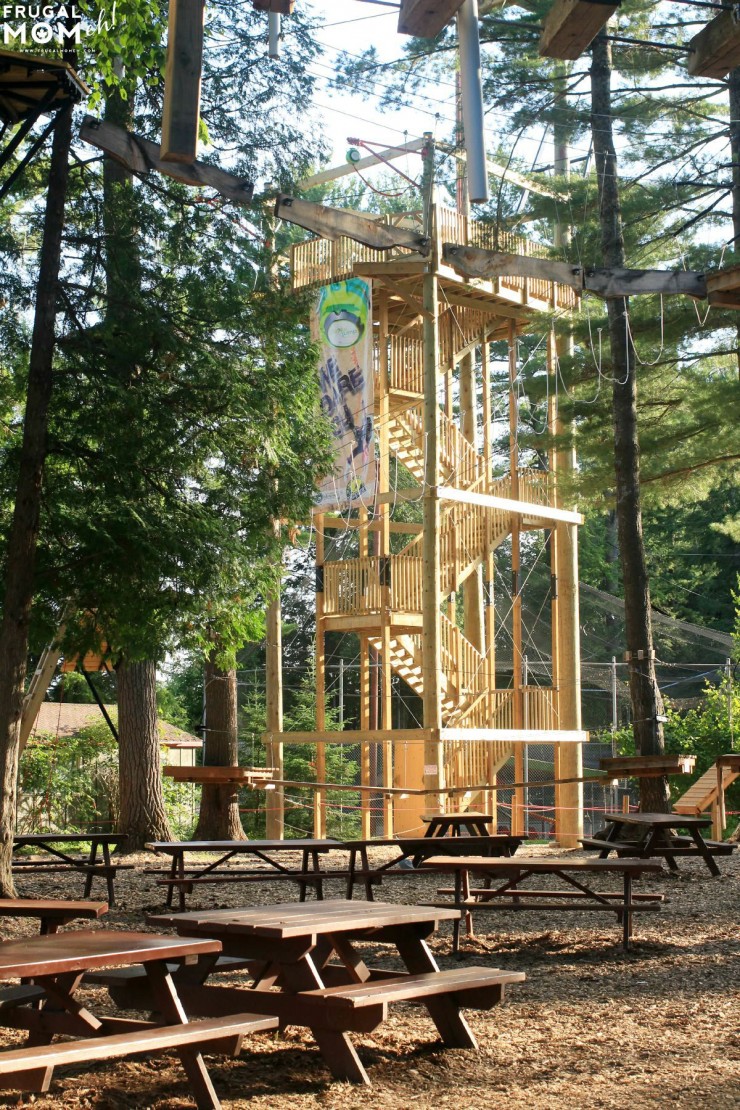 Also new this year are additions to the Muskoka Ziplines and Arial Park, which opened at the Village in 2014.  The aerial park features zip lines, monkey lines, Tarzan ropes and a climbing wall. 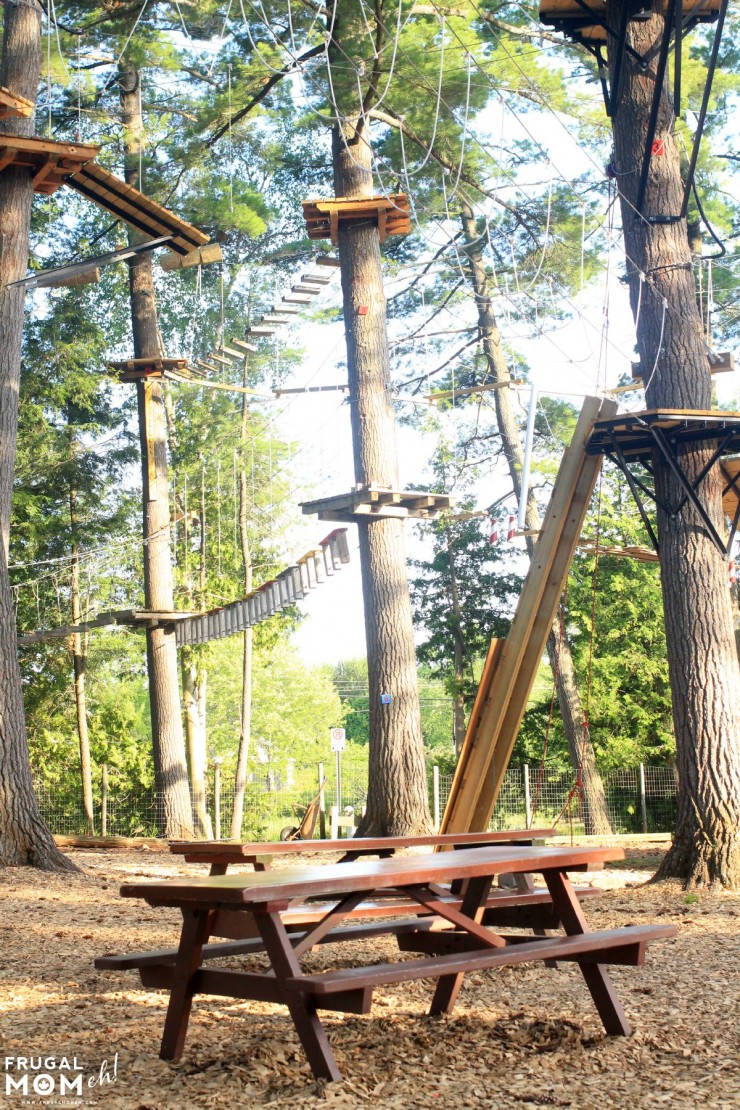 New additions include an enhanced obstacle course, a new zip line course and a bungee-like jump tower for the thrill seeker.

Also to be found in Sportsland are batting cages, laser tag, and mini-golf.

Check out Santa’s Village for up to date admission pricing to the Village and ticket costs for Sportsland.  The admission does add up but once in the park everything is included aside from food making it well worth the cost in exchange for life-long memories and an incredibly fun day!