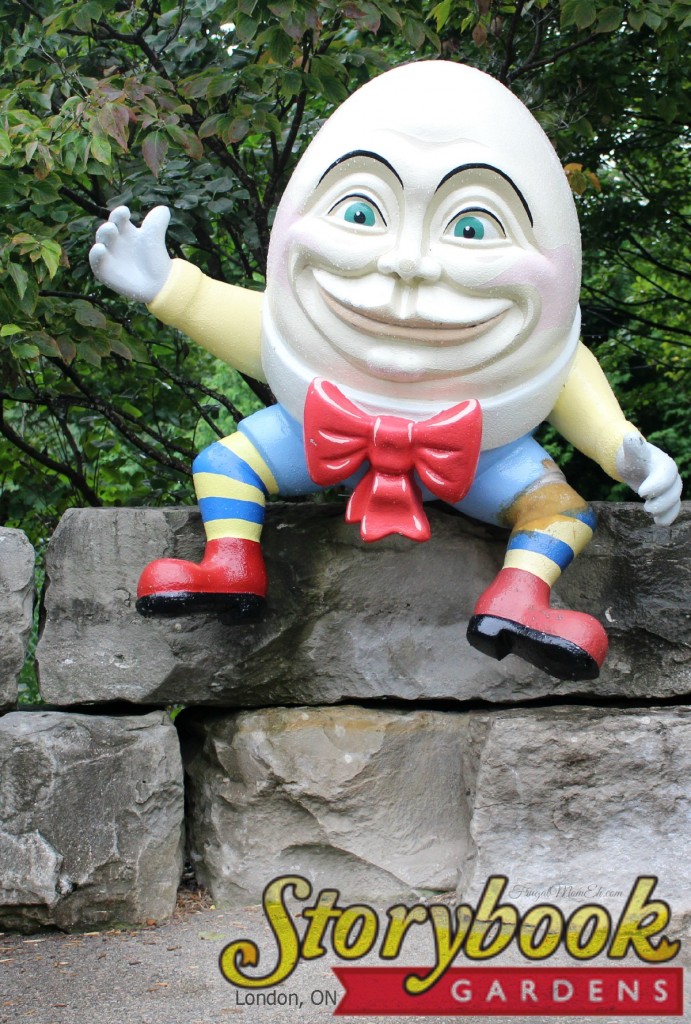 Right after breakfast on our second day in London we left the Homewood Suites by Hilton® Hotel and headed out to Storybook Gardens, an amusement park for young children located right in London, Ontario.  A Family pass (2 adults and 2 children) for the park is $26 on weekends, and $5 a person on weekdays as rides and concessions are closed. 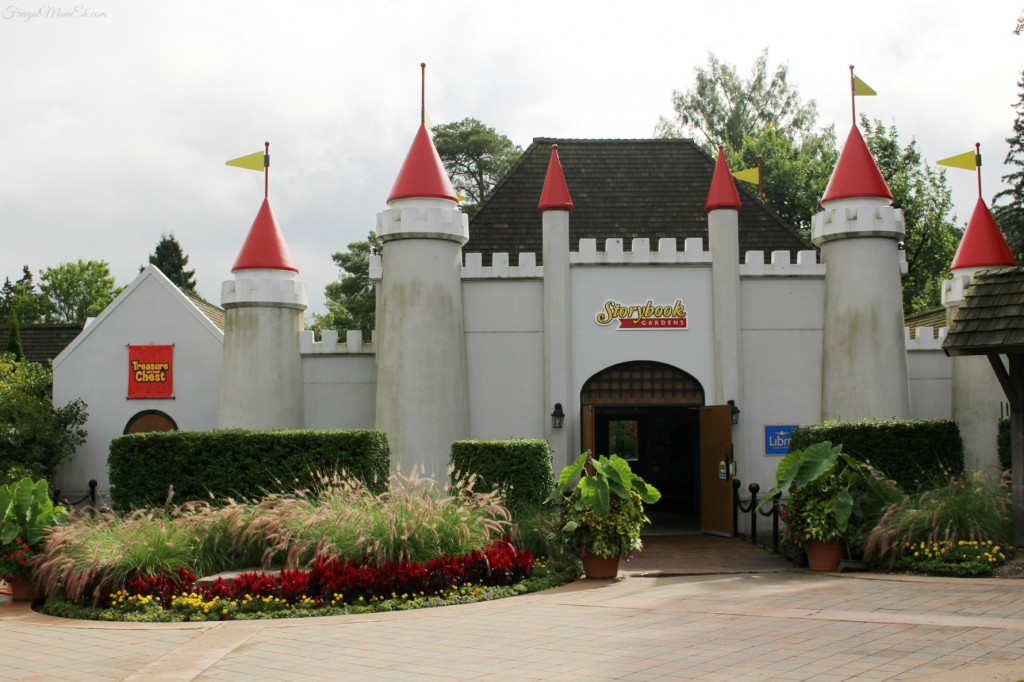 The front entrance is a castle which had Keira super excited as she is going through a serious princess and castle phase.   Inside you can purchase your tickets/passes to the park and you will find a little gift shop inside as well.

Once you leave the castle you can make a wish at the wishing well before starting your adventure.  It also presents families with a great photo opp to help preserve memories of your day out! 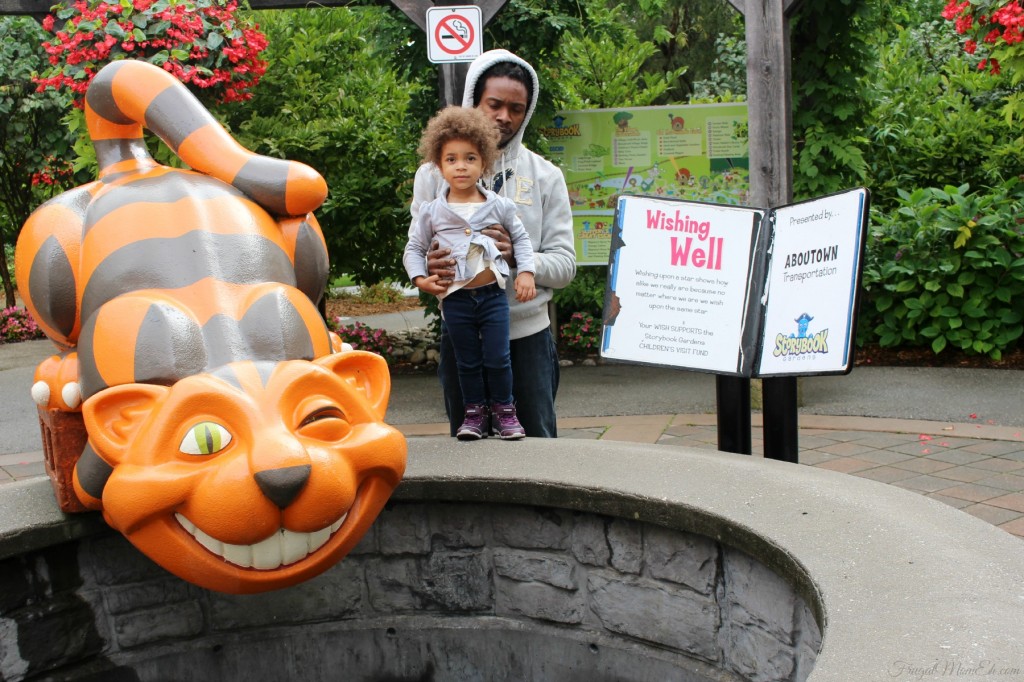 The next section of the park we encountered were the rides including a Ferris Wheel, Swings, Elephants and a Slide.  Unfortunately Keira was under the height restrictions for these rides.  Outside the park though are a carousel ans Springbank Express Train which had no height restrictions but unfortunately didn’t appear to be in operation when we first arrived, likely due to the rain earlier in the morning.  As we left I noticed the Carousel was running but Keira and I had slipped in a puddle and were a bit too cold and wet for rides at that point.  (So here is a tip, don’t attempt to power walk while carrying your toddler through a pathway covered in puddles.  It will not end well.)

Next we came upon “Old MacDonald’s Farm”, when we arrived the animals were mostly still in their stalls being fed and cared for by a staff member.  The “farm” features miniature Donkeys, sheep. goats, chickens and bunnies.  Keira loves animals and really enjoyed visiting with them so we spent awhile looking at and talking about the animals. 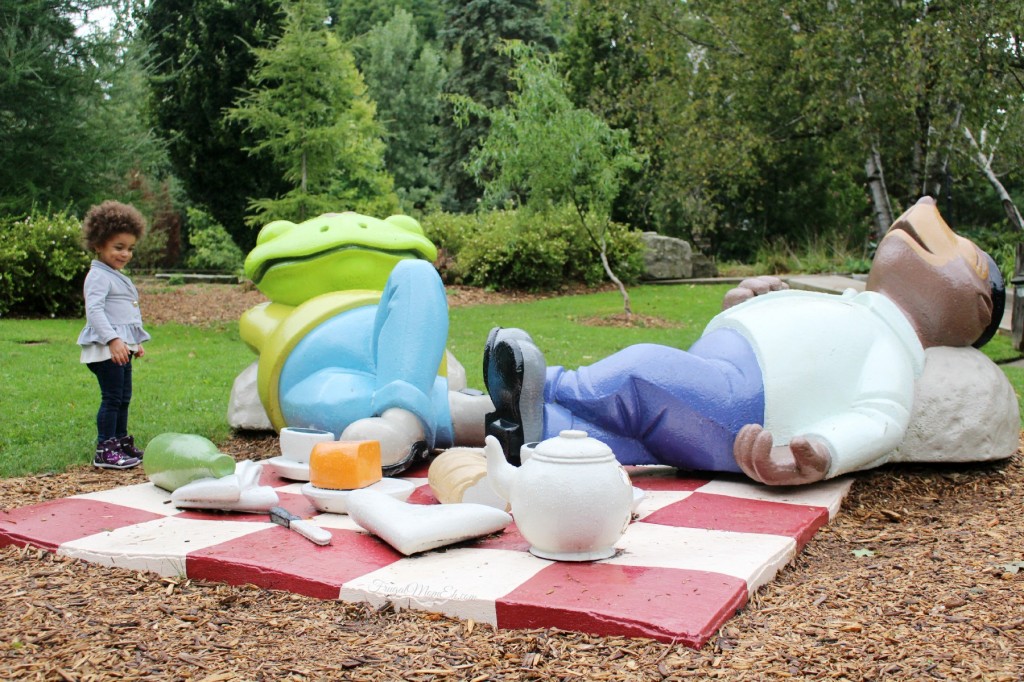 The park is Storybook themed and you will find characters around the park like this super cute Wind in the Willows installment; we also found Humpty Dumpty sitting on a wall among others.

We next visited Storybook Valley Village where kids can play in the Old Woman’s Shoe and other miniature playhouses. 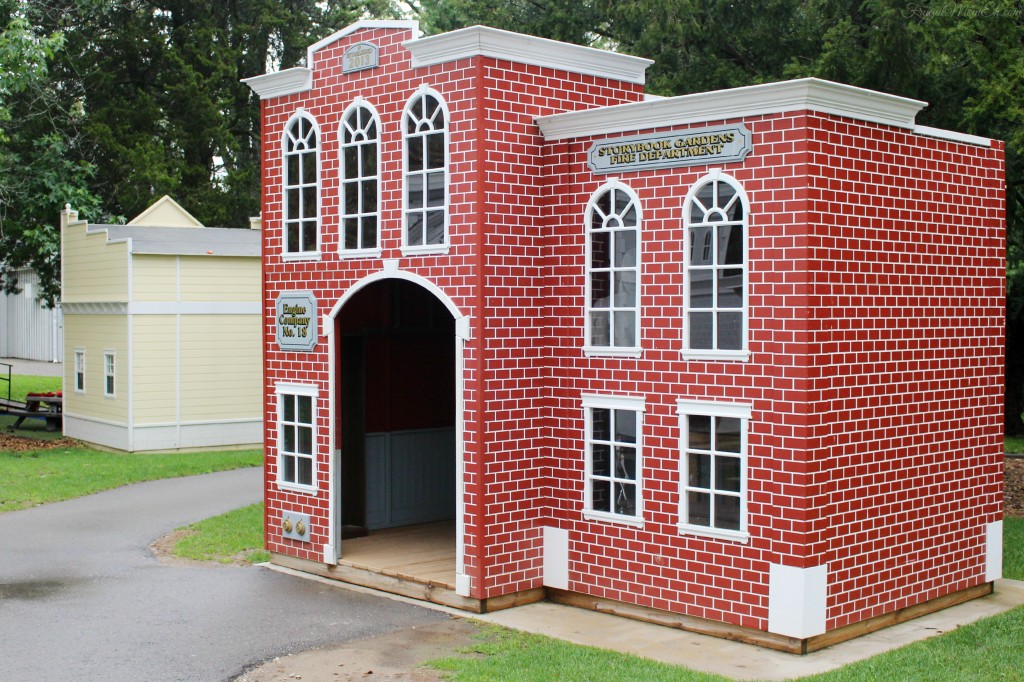 We were lucky that we had arrived shortly after the rain ended as most of the children were on the rides so Keira had the entire Valley Village to herself.  She had a ton of fun going from house to house to look around and play with the toys she found inside each. 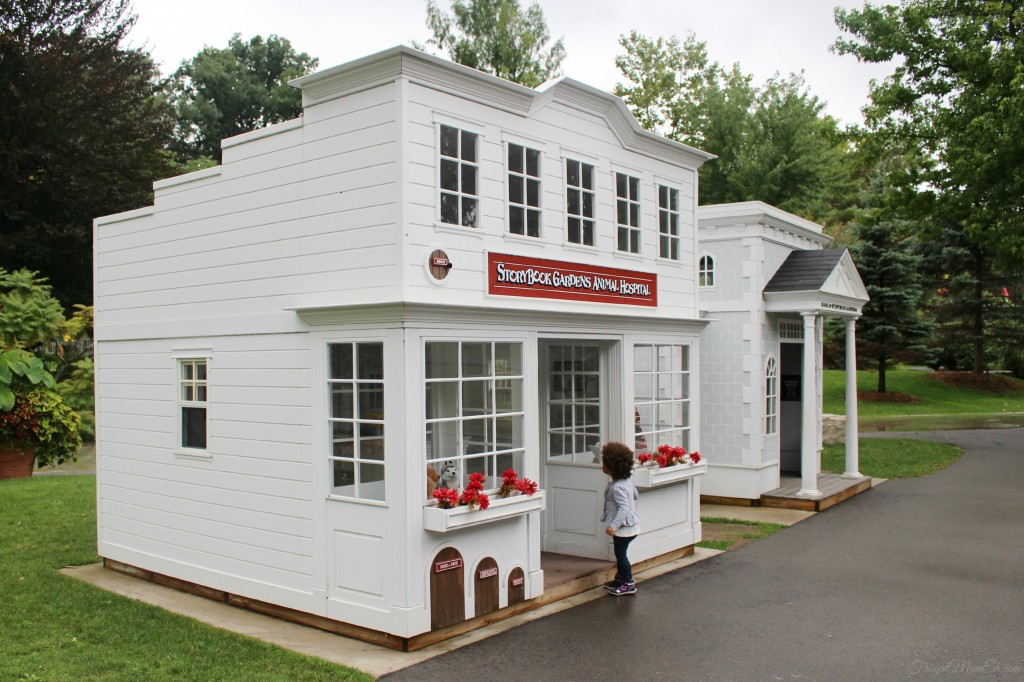 There is even a cute little bank complete with an escape hole! 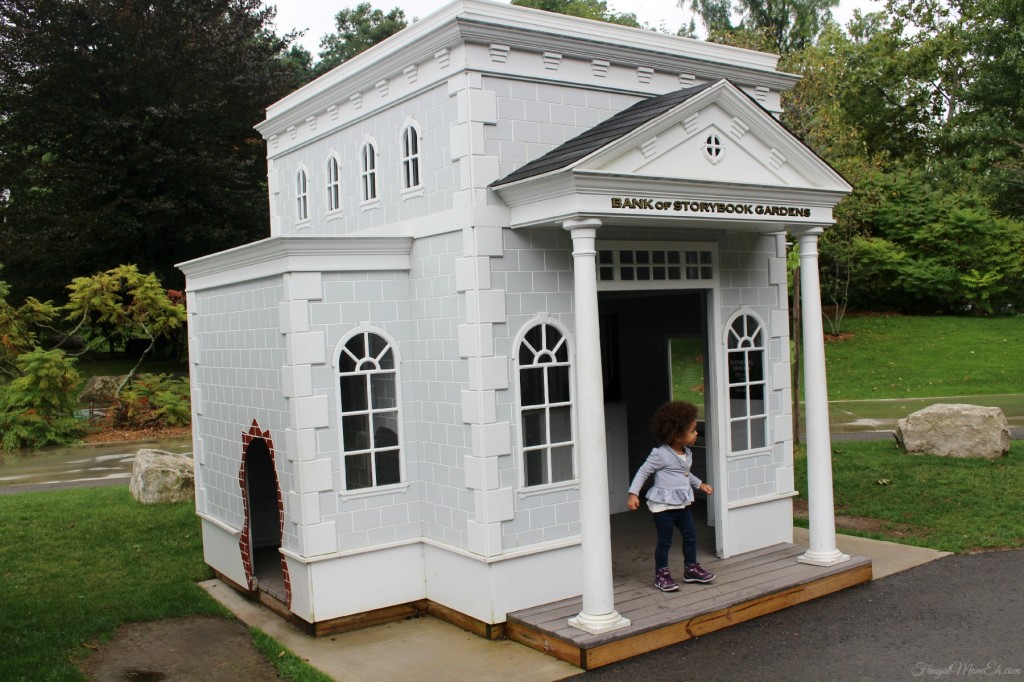 Of course, the Valley Village wouldn’t be complete without a peek into the Old Woman’s Shoe which leads to even more playhouses.  Kids love new toys and Keira could have easily spent hours playing there alone. 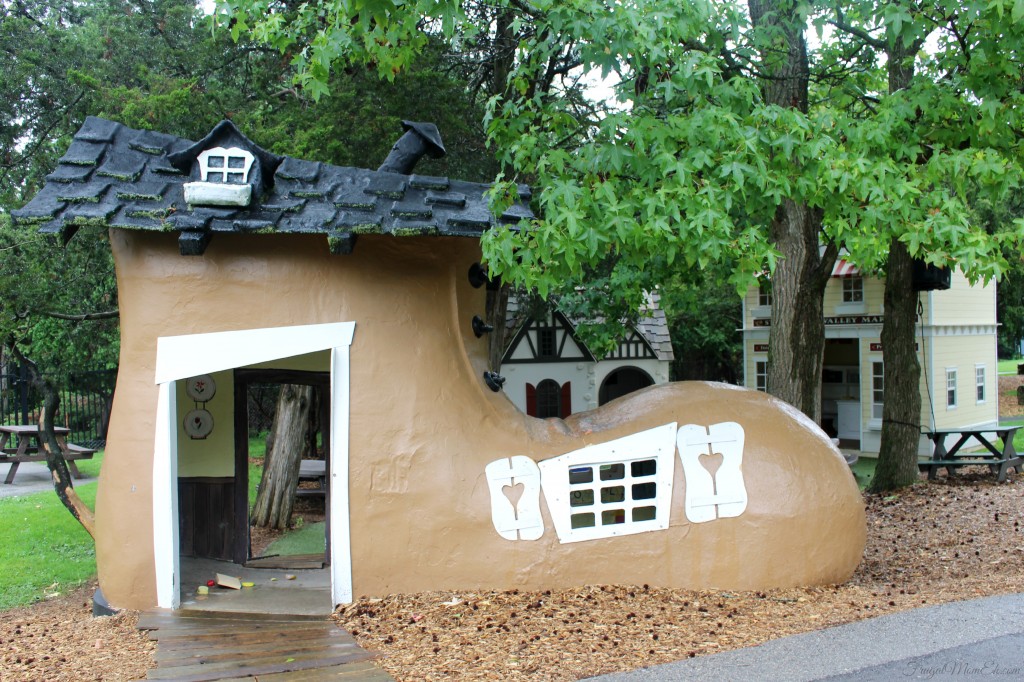 She also loved the “castle” bridge and kept asking to go across it with me.  She thought it was completely magical.

There is a Splash pad complete with change area that is open in the summer and looks to be a lot of fun.  We also noticed a bounce pad that was being cleaned off for use. 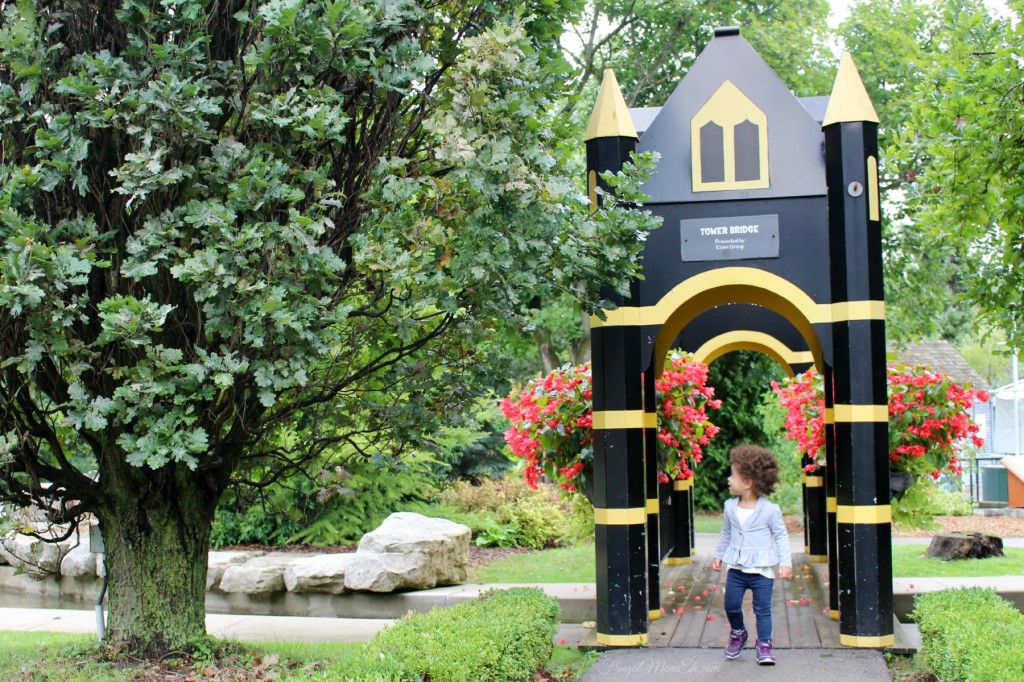 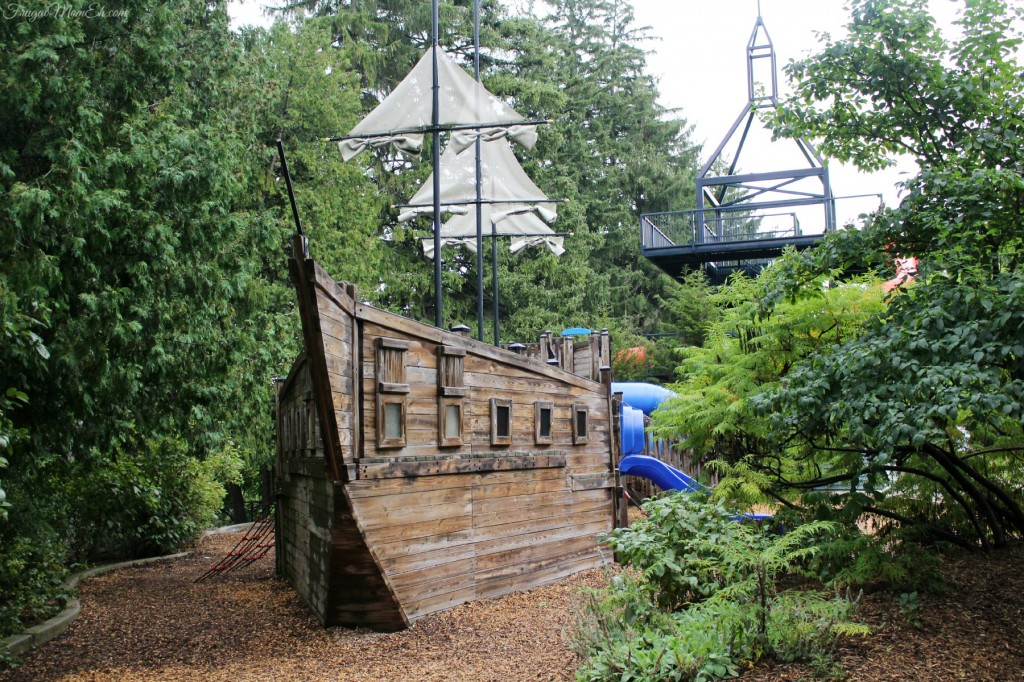 The last stop was Pirate’s Island which features a three story tall slide and various play grounds for different ages.  There is even a really cool Toddler Play Pirate Ship which is perfectly scaled for a toddlers little legs.  Keira had so much fun steering the ship and going down the slides and just generally running around. 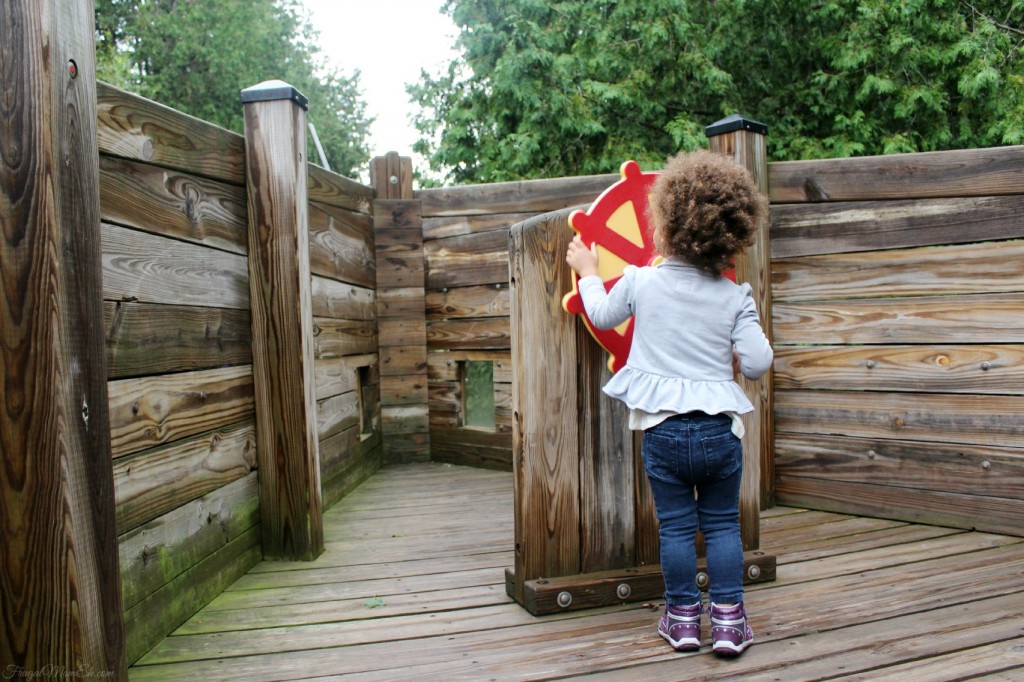 Keira had so much fun during our visit it was hard to get her to want to leave and took some bribing with the promise of some cheese pizza.  While I wish more had been open when we arrived, particularly the rides she could actually go on, she still fully enjoyed the park so in the end it was definitely worth the visit, even on such a cold and wet day.

Storybook Gardens is open year round, with what sounds like a really fun skating trail open in the winter months!