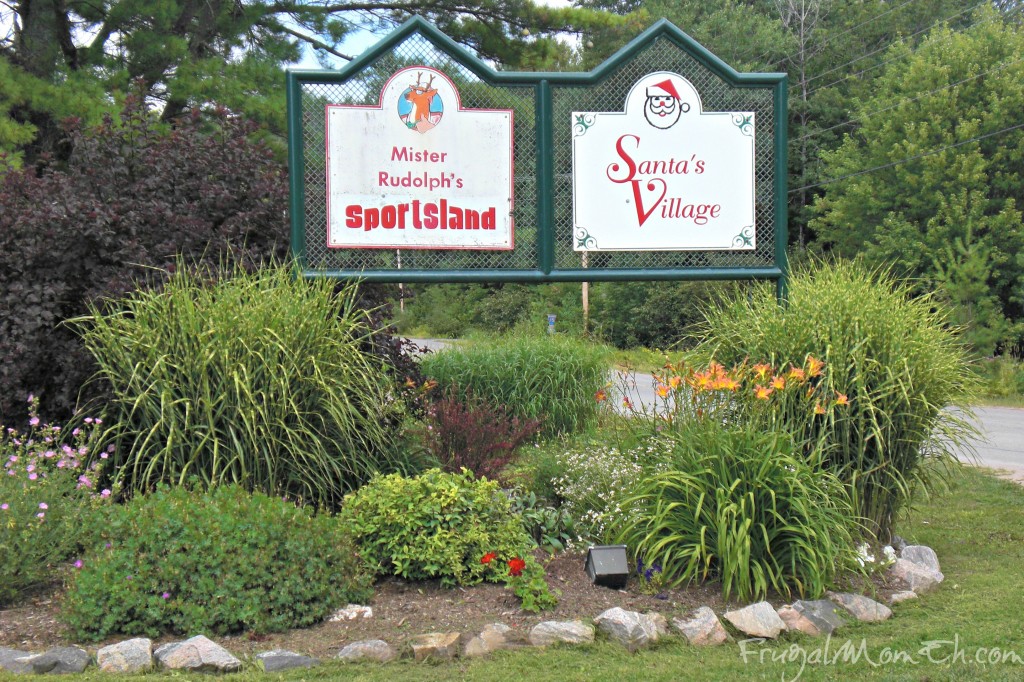 My family recently had the chance to visit Santa’s Village in Bracebridge, ON (in the Muskoka area).  When I found out we would be going I was super excited!  My parents had taken me to Santa’s Village when I was 4 years old while we were up in Muskoka renting a cottage.  I don’t really remember the visit but having seen pictures of our trip I knew I certainly had a ton of fun!  (See the gallery below for more old-school Santa’s Village pics!)

Santa’s Village is one of Bracebridge’s most famous and popular tourist destinations. Nestled in Muskoka’s Enchanted Forest, halfway between the North Pole and the equator on the 45th parallel, it is – naturally – Santa’s summer home of choice.

The Village boasts two theme parks, a day camp, animals, and a family campground, where kids of all ages can visit Santa, enjoy rides, games, and countless other family-friendly activities.

We packed up all our stuff as we would be staying overnight at the Whispering Pines Campground right across from Santa’s Village and headed off early in the morning to try and get there for the 10 AM open time.  The trip was actually pretty quick and despite a really terrible accident on the highway causing lots of traffic we were there in under 3 hours.  Unfortunately Keira decided she was not going to sleep the entire 3 hour road trip which led to some issues later on in the day but that’s a whole other story I will get into when I post about our camping stay.

Once we got into the park the first thing we did was to climb up to Santa’s Chapel and let Keira ring the bell.  I could just see by the look on her face that she was absolutely enchanted with Santa’s Village between the festive decorations everywhere and the fact that we were in a pine forest with all kinds of little kids running around.  Her smile didn’t end despite not having napped all day. 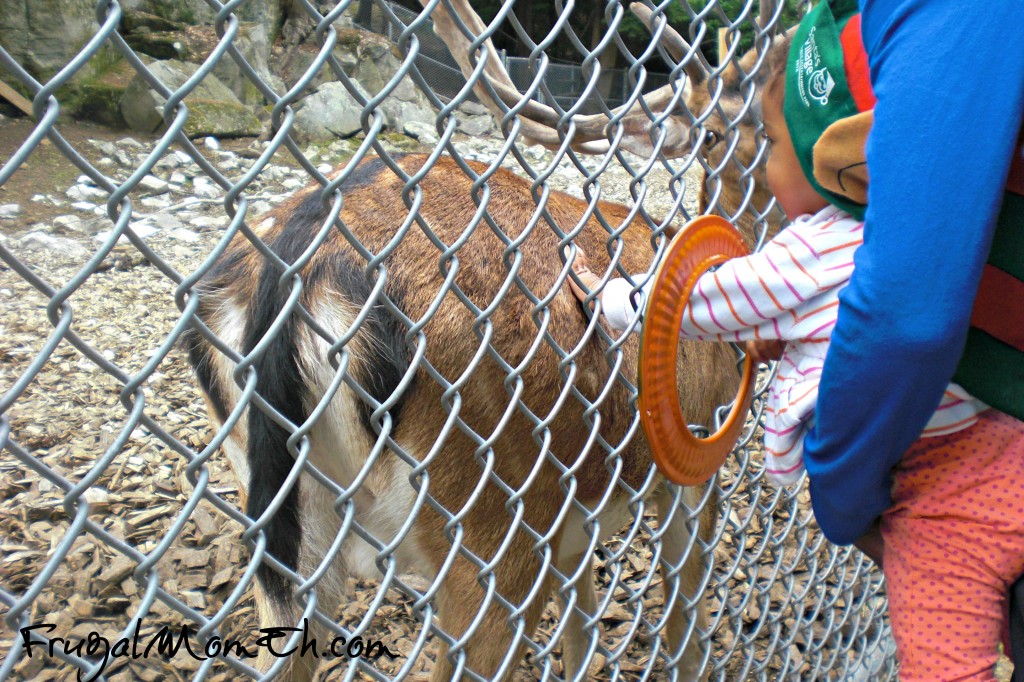 We stopped to feed the reindeer on the way to ride the Miniature Train.  The deer were super friendly and eager to be fed!  They are gentle enough that Keira was able to pet them, which she loved!  The miniature train was a lot of fun and although the line seemed long we didn’t have to wait very long at all for our turn.  The three of us were able to squish into one car together and away we went through Santa’s forest.  Hidden along the way are various sights like the rope to China, and the largest gold nugget in the world.  See if you spot them when you take a ride! 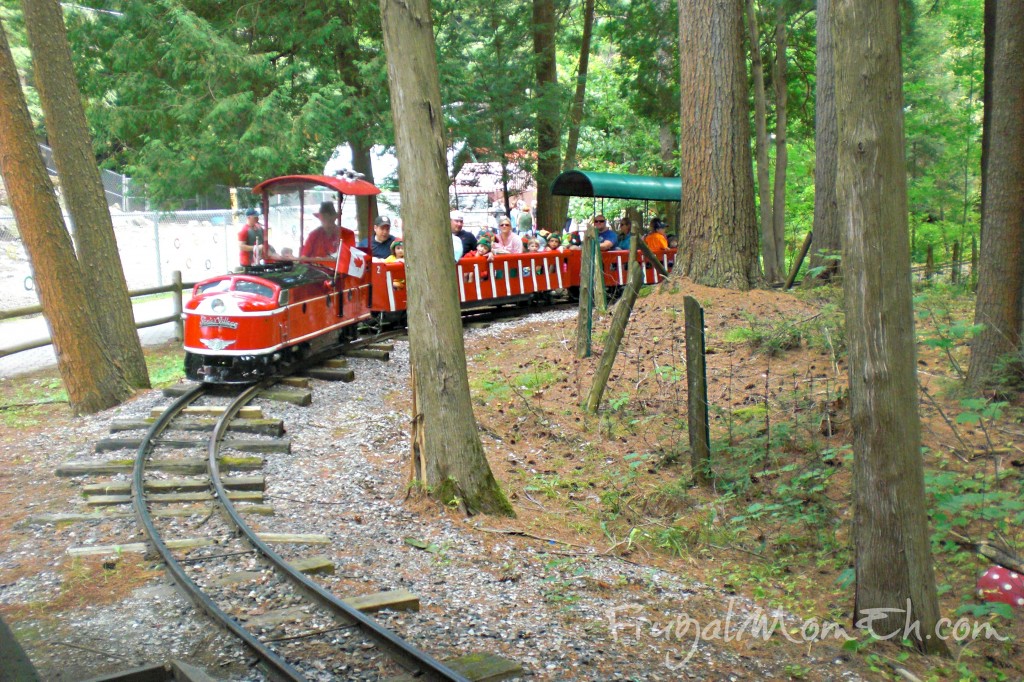 Afterwards we visited Santa Claus and Mrs. Claus in their summer home – Keira had her picture taken with Santa too!  We also enjoyed having Keira take her picture behind all kinds of cut outs we found along the way.  Keira seemed to enjoy it too because each one made her break out into a huge smile! 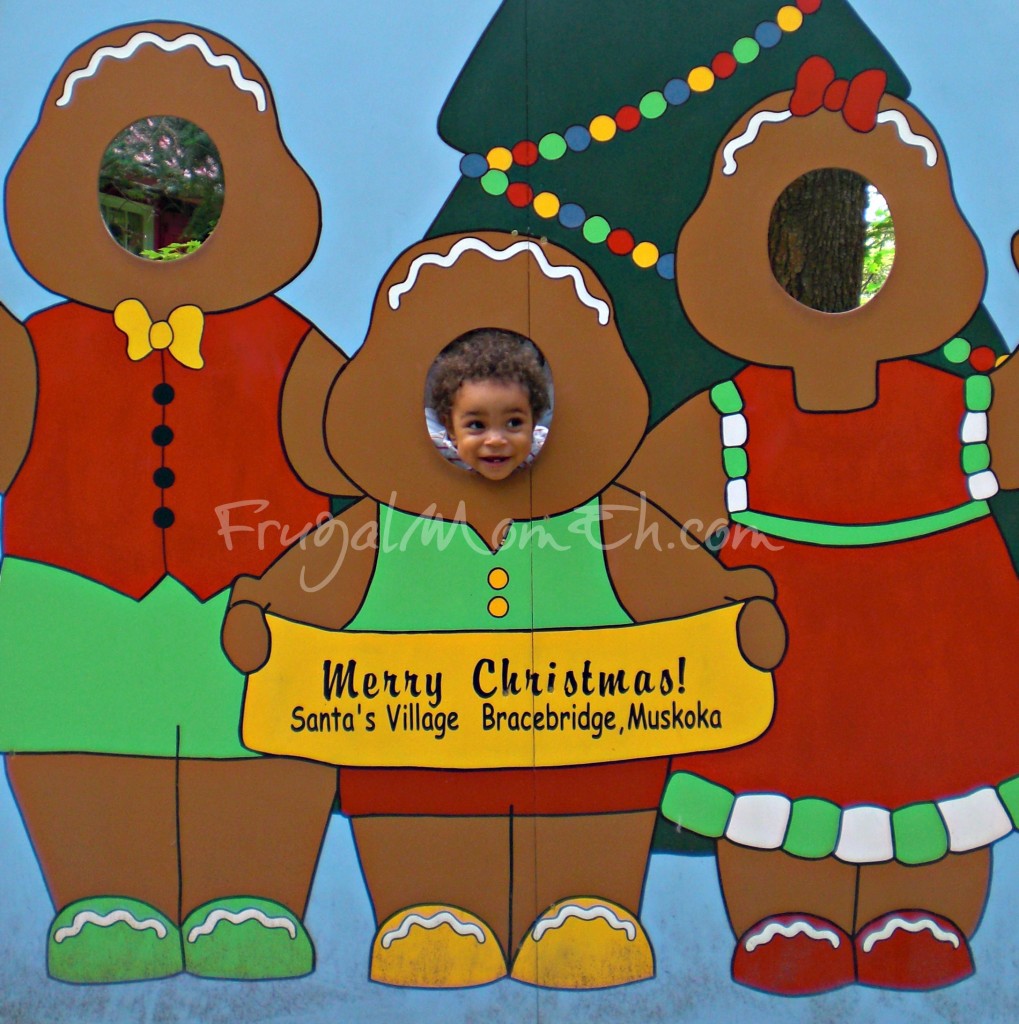 I have to say though, we were most excited to go for a ride on Santa’s Summer Sleigh with Captain Ricky who is retiring at the end of this season.  Since 1980, Captain Ricky’s led more than 92,000 rides and 2.6 million passengers up and down the beautiful Muskoka River in Santa’s Summer Sleigh Jet Boat.   This is one ride you don’t want to miss and I think was Keira’s favourite out of everything.  Fun music is played during the entire 10-15 trip up and down the Muskoka River and it had Keira dancing around and clapping.   We actually went for several boat rides before we left because my husband enjoyed it so much.

Keira also went on the Red Baron Airplane Ride with her Daddy and went to visit all the other animals on Santa’s Farm before it was time to head back to our campsite for some dinner (and much needed rest!)

I was really impressed with how much there was to do, not just for older kids, but also for Toddlers as well.  I was a little worried that there wouldn’t be much suitable for Keira but that wasn’t the case at all.  Unfortunately the weather was downright cold during our visit so we were unable to visit the newly expanded splash-pad.  I was a little disappointed as it looked like it would have been a lot of fun!

Older kids will enjoy other rides as well such as Peddle Karts, the Roller coaster, Swan Peddle Boats and more, not to mention all the fun to be had in Sportsland!

Check out more photos in the gallery below!

Have you been to Santa’s Village?

20 thoughts on “A Visit to Santa’s Village in Bracebridge, ON is fun for the whole family!”