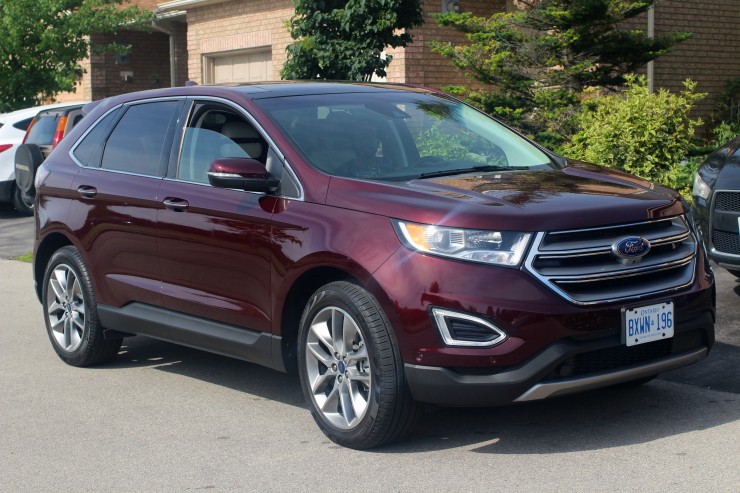 Canada is celebrating its 150th birthday this year and as Canada’s longest established automaker, Ford has been there for Canadian family road trips from the very beginning – right as the Canadian automotive industry took off. What better way to celebrate than with a road trip?

Canadian highways and backroads are often marked with quirky local landmarks and stunning views. The most unexpected destinations offer up unique and interesting local landmarks to explore. A Canadian road trip is always a great adventure whether you are driving from coast to coast or just a couple hours away.

So with an itinerary in hand, my family set off in a 2017 Ford Edge Titanium – to visit one of Ontario’s quirkiest landmarks – the largest Toonie in the world, found in Campbellford, Ontario! 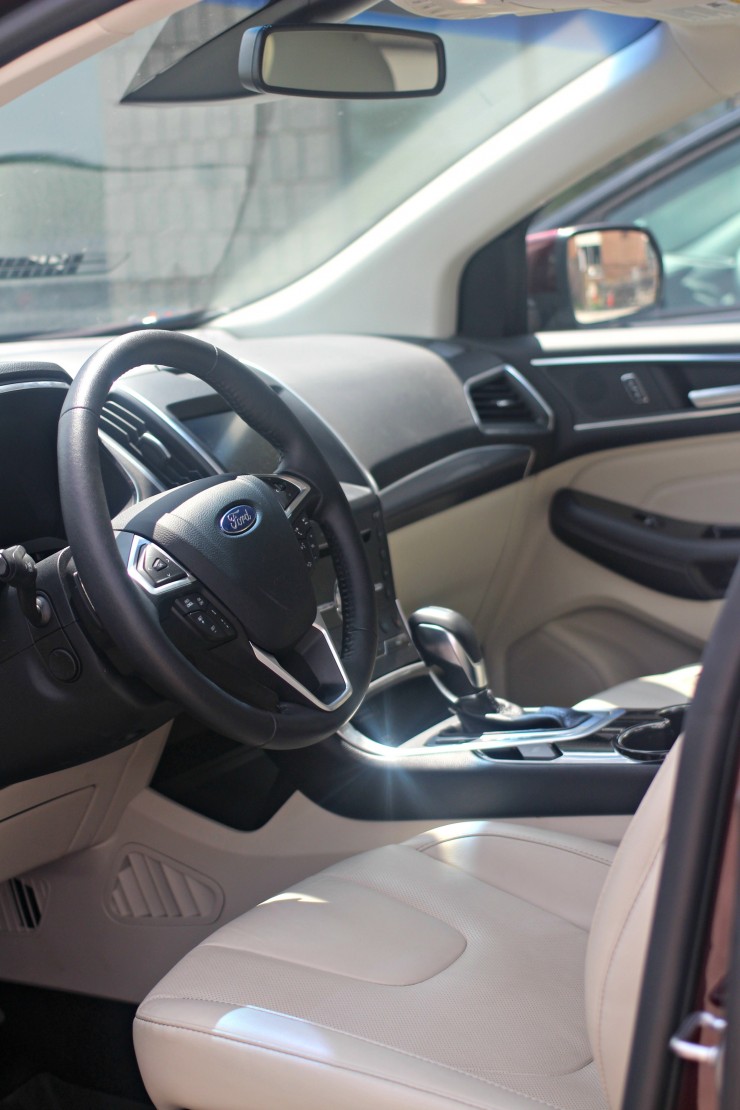 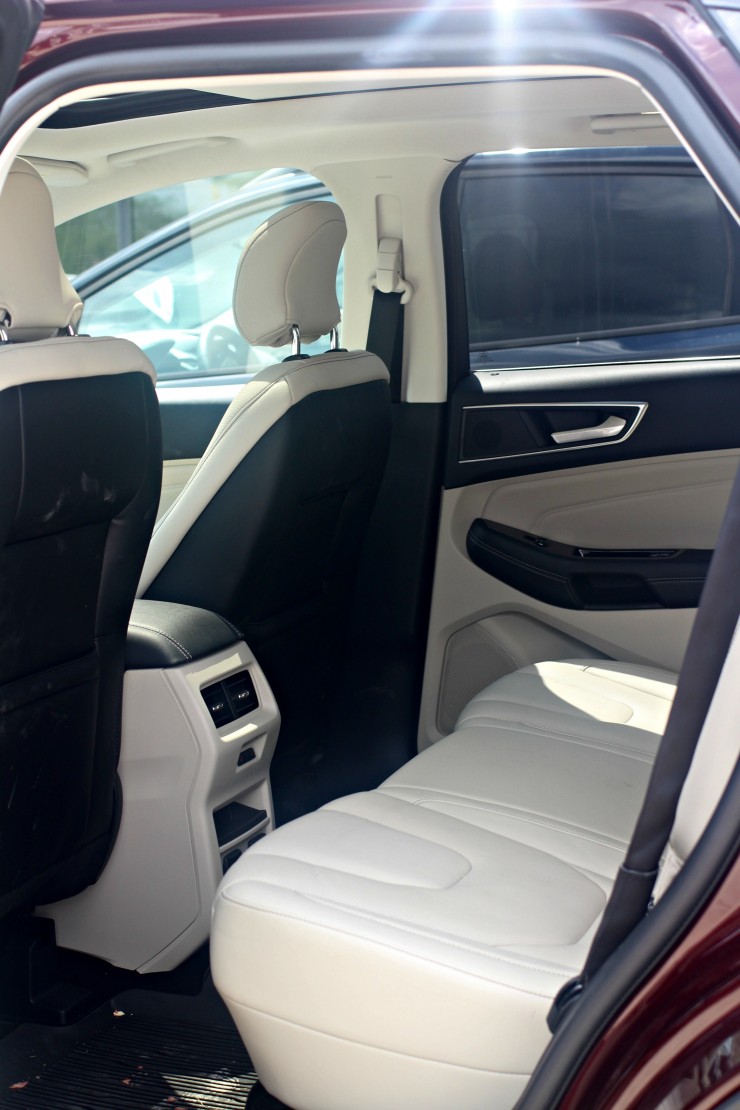 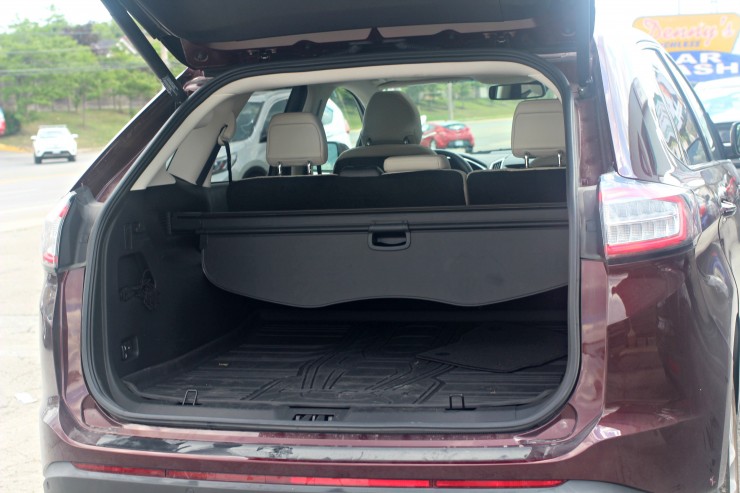 The Ford Edge is perfect for road tripping – it is roomy with plenty of storage space and loads of luxury from heated and cooled front seats and heated rear seats to the Panoramic Vista Roof® – a full size sunroof that covers almost the entire roof of the SUV. 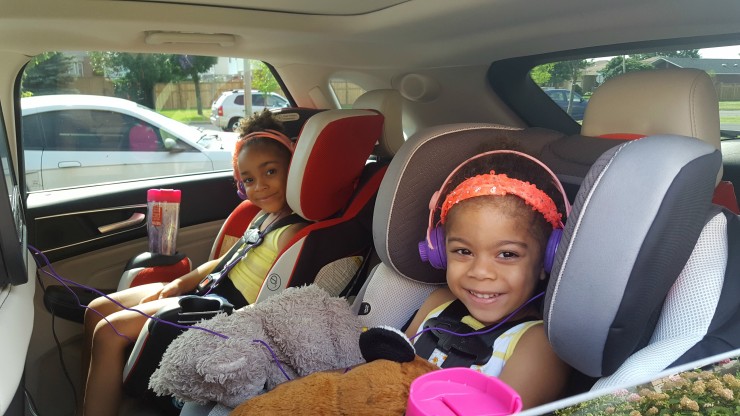 My girls loved having so much room in the back seats, and it really helped cut down on their typical quarrels as they were unable to annoy one another in the typical ways.  There was even plenty of space between their car seats for someone to sit in between them! 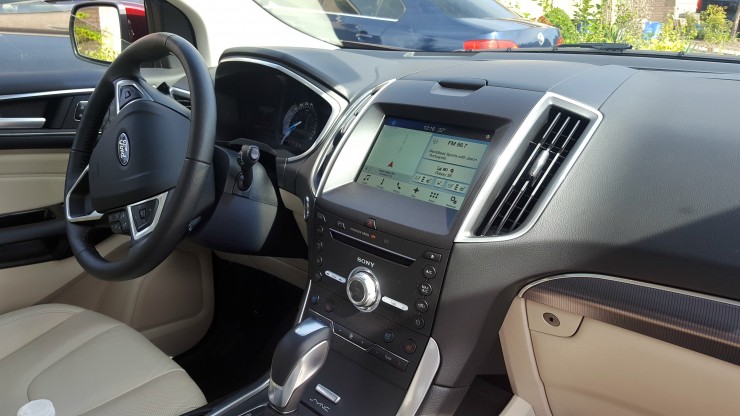 Of course some of the best features are found right up front and all of them were exciting to me as I am still driving my 2002 Ford Mustang – which came with a cassette deck and not the incredibly innovative technologies found in the dash of the 2017 Ford Edge Titanium!

At the touch of your fingers is enhanced active park assist which makes handling the Edge Titanium a breeze right from the get-go. Parking an unfamiliar and much larger vehicle can be a little nerve-racking but I felt totally confident parking whether I was parallel parking or simply backing into a parking space.  In addition to the park assist, the Edge features an optional 180 degree camera that gives you a full-colour view of the front of the vehicle when pulling out of a spot as well as a rear view back up camera. 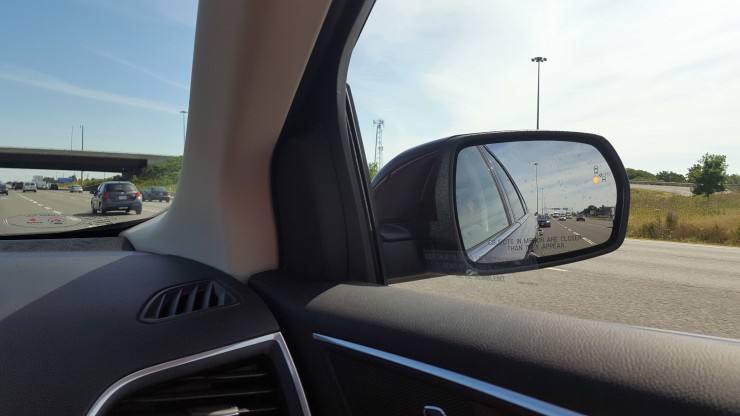 Another feature I thought was great is the blind spot information system which uses the sensors to detect traffic in the Ford Edge’s blind spot and provides a visual warming. There is also a lane keeping system which works to help a driver maintain proper lane position and gives alerts when the vehicle wanders.

When you hit the road for a long car ride you are bound to make use of cruise control, and the 2017 Ford Edge really takes cruise control to the next level. It features adaptive cruise control and collision warning with brake support that allows you to not only choose your speed but also the space between you and the vehicle in front of you via preselected gap settings. This is such a cool feature – when the sensor detects traffic slowing ahead it automatically slows down the vehicle and once the traffic has cleared the pre-set speed resumes. In the case of a potential collision ahead, a red warning light will illuminate and a warning chime sounds. If you don’t react quickly enough the brakes set themselves up for increased brake sensitivity for full responsiveness when you do brake.

These safety features are really reassuring, especially when you have your whole family in tow! 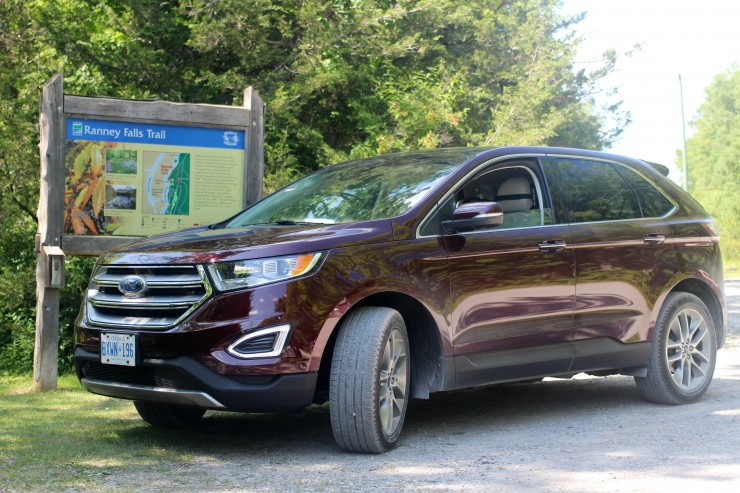 After a long drive on the jammed highway 401 through Toronto we finally arrived in Campbellford and after such a long ride we decided to stop at Ferris Provincial Park first for a hike to the Ranney Gorge Suspension Bridge. The 2017 Ford Edge easily handled the unpaved roads through the park and soon enough we were all out and ready for a walk. 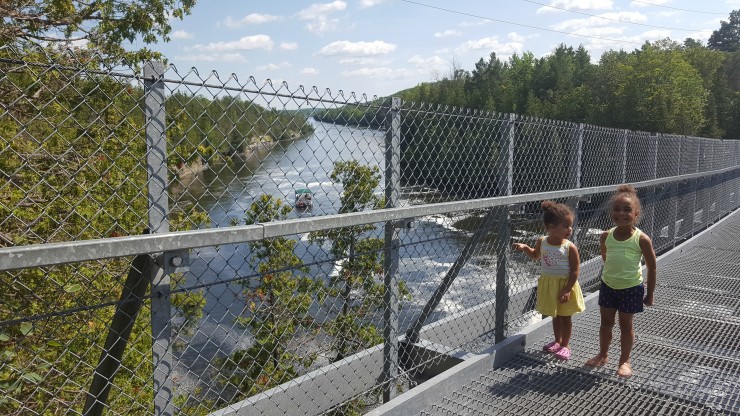 The Ranney Gorge Suspension Bridge was a little too frightening for me. I don’t do heights well and it is a busy attraction which makes the bridge sway back and forth quite a bit more than I am comfortable with. The girls on the other hand were completely fascinated by the bridge and happily walked from one end to the other with my husband while I watched from the safety of the trail. It is a really neat bridge though, and the views from the bridge are spectacular as it hovers over 30 feet above the gorge, just below the Ranney Falls. 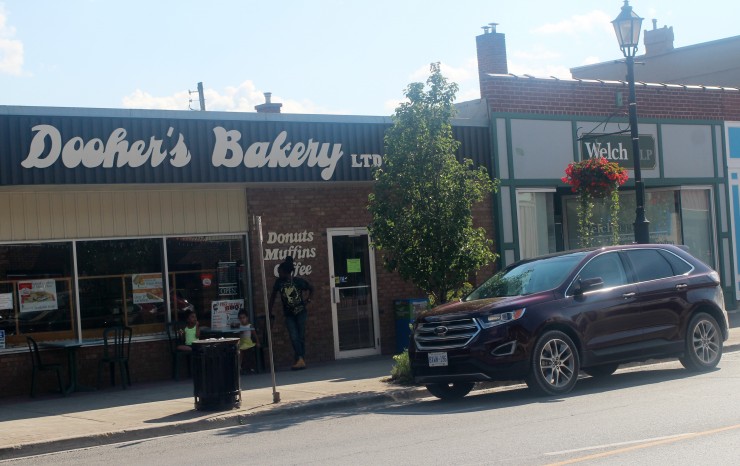 Our next stop was Dooher’s Bakery which was not only on our itinerary but also recommended by my friend Kerrie from Family Food and Travel. Unfortunately it was rather late in the day when we arrived and they were already closing up shop. 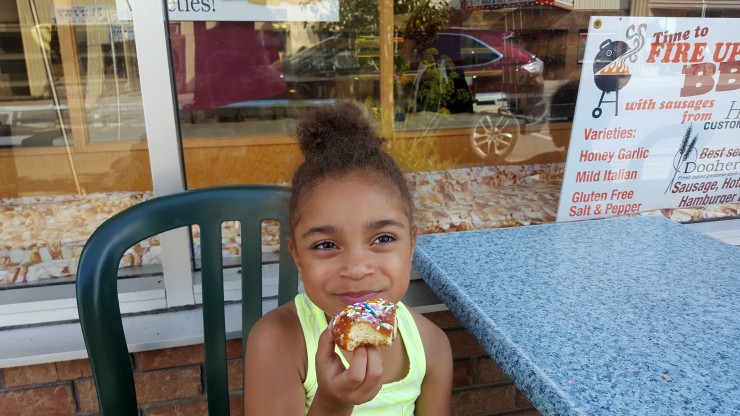 Fortunately for the girls, however, they did have a sprinkle doughnut for the girls to enjoy.  Doesn’t it look delicious? 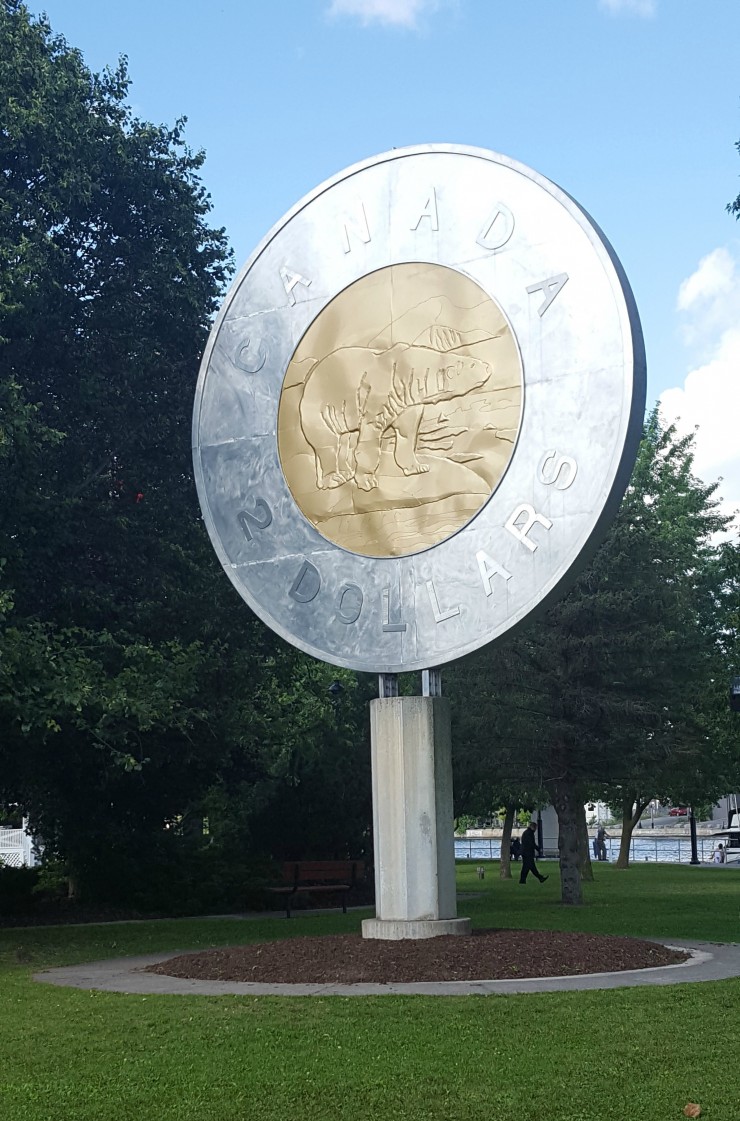 Of course, we couldn’t end our day without a visit to the giant Toonie monument! Canada is full of interesting monuments including WaWa’s Goose, Sudbury’s giant nickel and Mac the Moose in Moose Jaw – just a few of the ones I have seen on past road trips across Canada. The giant Toonie was a new one for me though and really neat!

The girls were literally screaming when they saw the monument – and insisted on calling it a “giant chocolate money”. The Toonie monument was actually erected in Campbellford in honour of Canadian wildlife artist Brent Townsend who illustrated the polar bear on the coin and lives in Campbellford, what a great tribute!

We headed in for the night at The Water’s Edge Inn, ready for more discovery and adventure in the morning – and looking forward to enjoying the fantastic view of the Trent River right from the back deck off our room. 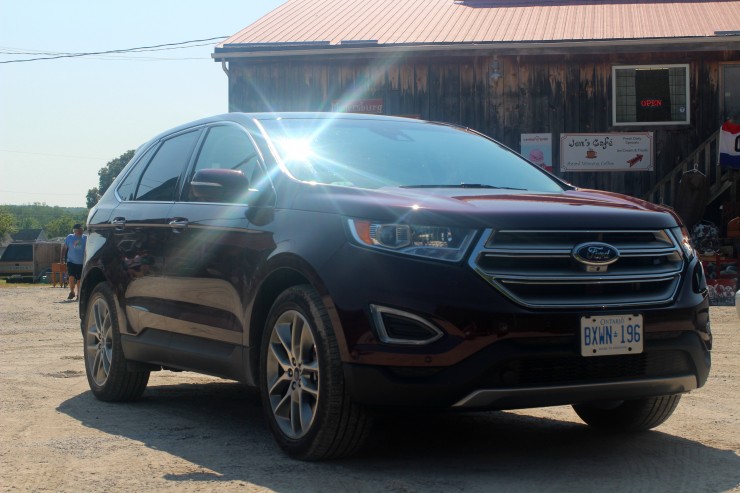 After a quick breakfast at a local park overlooking the Trent river, we headed out to see more of Campbellford in the 2o17 Ford Edge Titanium. 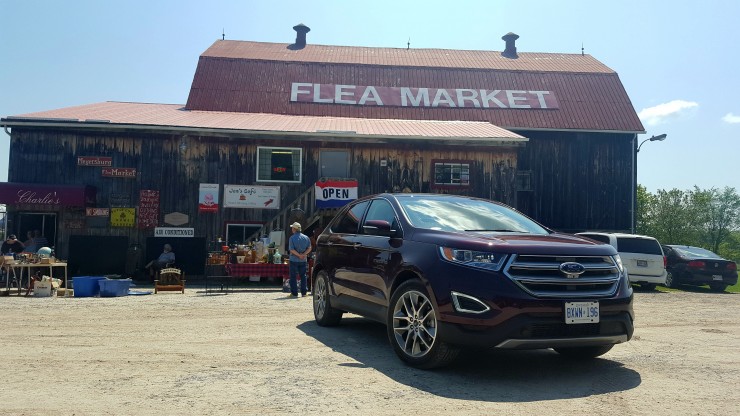 First stop? Meyersburg Flea Market! It’s a neat flea market with loads of great finds from antiques to books and more. I actually found a great deal on a vintage Beatles record that had me feeling good for the rest of the day.

Our next stop was Empire Cheese & Butter Co-o0p where I scored some 7-year old Cheddar cheese and cheese curds. Can you say poutine? This is a must-stop for anyone who seriously loves cheese. 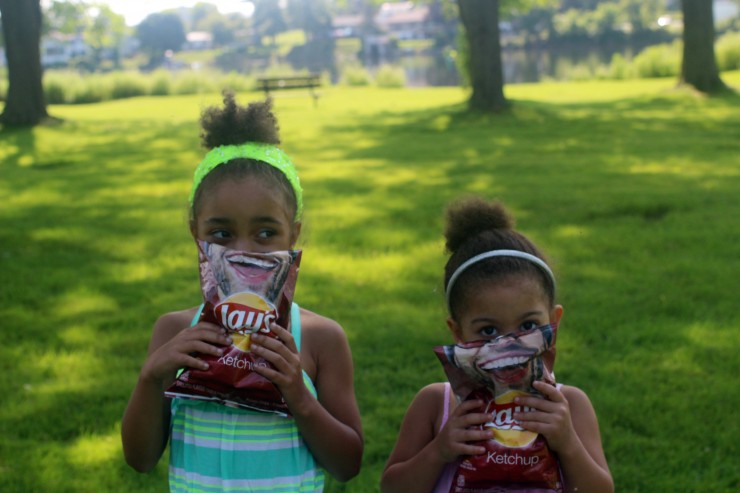 Before heading home – just one last picnic stop for a quick snack and a little Canadian fun. I don’t know about you, but they crack me up!

Overall, we had a fabulous and memorable weekend of exploring thanks to Ford Canada and the 2017 Ford Edge Titanium. Never has the 401 through Toronto felt so comfortable!

Disclosure: I was provided with a 2017 Ford Edge Titanium and perks to facilitate this article. As always, all opinions are honest and  100% my own.