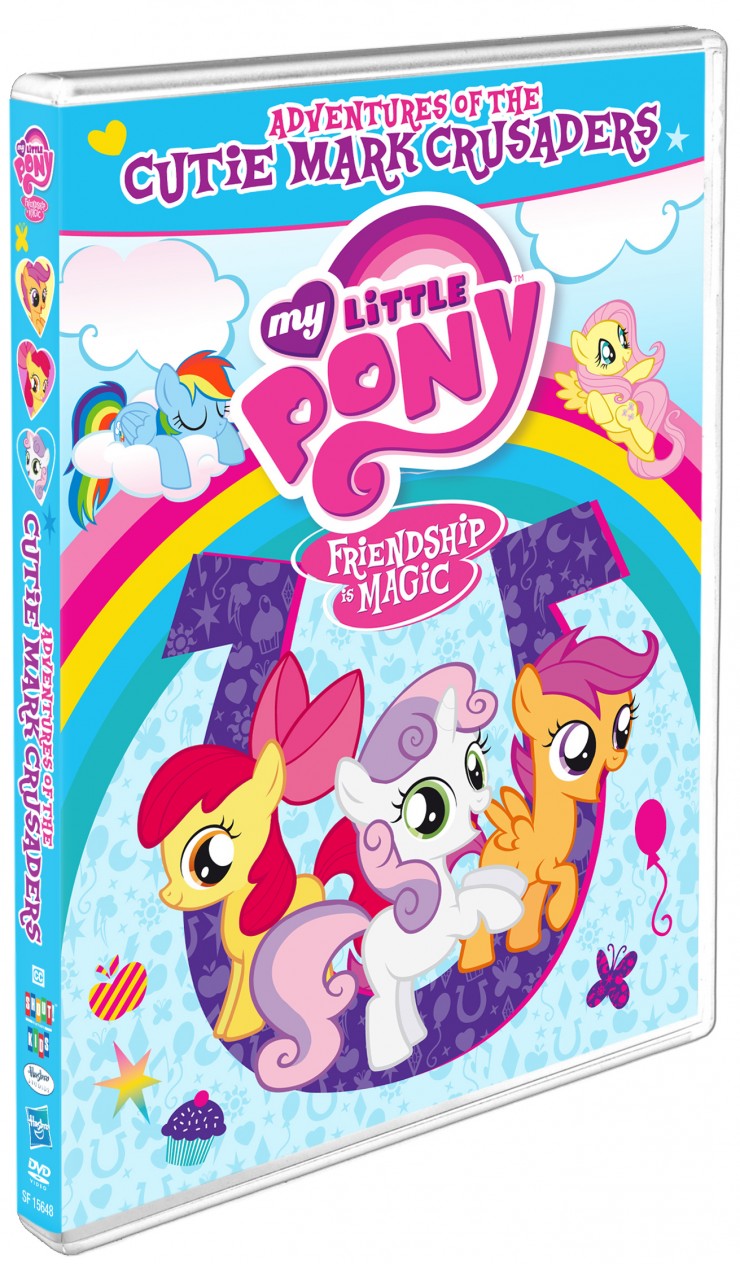 from Shout! Factory Kids in collaboration with Hasbro Studios. Offered as a bonus feature is a fun new sing-along and colouring sheets!

In EQUESTRIA, obtaining a CUTIE MARK is an important coming-of-age moment for a young Pony. After all, Ponies acquire their CUTIE MARKS only after they discover a unique characteristic about themselves, setting them apart from all other Ponies. So when Sweetie Belle, Scootaloo and Apple Bloom meet, they instantly become friends and make it their mission to find their CUTIE MARKS! They are The Cutie Mark Crusaders!


My Little Pony – Friendship Is Magic: Adventures Of The Cutie Mark Crusader episodes include:

For even more Pony fun, PlayDate Digital has announced the new Cutie Pox Storybook App. When Apple Bloom becomes impatient waiting for her cutie mark, she decides to take things into her own hooves! In this interactive story book, follow Apple Bloom and the fillies as they learn that taking the easy path toward your goals isn’t always the best way. Enter the world of Equestria in this storybook adventure full of excitement, humour and friendship! The release of “Cutie Mark Crusaders” marks the first of a series of planned collaborations between PlayDate Digital and Shout! Factory to cross-promote My Little Pony Friendship is Magic stories and media.  In this collaboration, products contain promotional material highlighting a variety of products. In addition, Shout Factory and PlayDate will host contests and offer value-added bonus material.

This is a really great collection of episodes for both die hard MLP fans and new ones.  The first episode, “The Cutie Mark Chronicles” highlights the backstories of the main characters and how they acquired their cutie marks.  We really love MLP in my household.  I, of course, grew up on classic MLP but I’ve grown to really love the Friendship is Magic series and enjoy watching the episodes as much as my 3 year old does.  We love the vivid colours, the catchy music, the fun plotlines and dialogue as well as the moral taught in each episode.

The only issue with this DVD was the inclusion of the episode Pinkie Pride which doesn’t seem to fit in with the rest of the episodes.  Nonetheless this is a really great collection worthy of picking up.

5 thoughts on “My Little Pony – Friendship is Magic: Adventures of the Cutie Mark Crusaders”