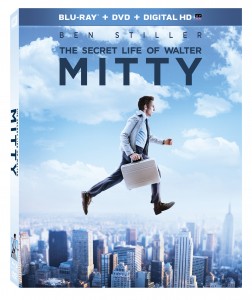 With sweeping cinematography and stellar performances THE SECRET LIFE OF WALTER MITTY, tells the story of a timid magazine photo manager who lives life vicariously through daydreams and when a negative goes missing must embark on an incredible true-life adventure. With stand-out performances from Ben Stiller (Night At The Museum, Meet The Parents) Golden Globe** and six-time Emmy Award*** nominated actress Kristen Wiig (Saturday Night Live, Bridesmaids, How To Train Your Dragon), Adam Scott (Step Brothers) and Shirley MacLaine (Wild Oats), the THE SECRET LIFE OF WALTER MITTY Blu-rayTM and DVD is loaded with more than an hour of behind-the-scenes special features, including deleted, extended and alternative scenes, featurettes that dive into filming in Iceland and Walter Mitty history, a gallery of exclusive reference photography, and music video “Stay Alive” by José González, and more.

I really enjoyed The Secret Life of Water Mitty, I found it to be both introspective and humourous.  Filled with cool special effects, sweeping cinematography and a dash of unrealism this film is just full of heart.   The lesson being taught is the classic  “Follow your dreams and go for what you want in life.”

The Fantasy sequences are fun but I found they took up far too much of the movie for a device meant to setup a character study.   I rather enjoyed Walter’s real life adventures quite a bit more actually.

Overall, this is a movie I will be more than happy to watch again as it is original feeling and memorable.   This is easily the best offering Ben Stiller has made to date as both an actor and as a director.  I loved the camera work, the story, and how it all comes together and I especially loves that it was not what I expected to come from Ben Stiller.

I definitely recommend picking up this DVD for a family movie night.