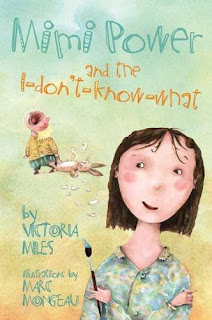 About Mimi Power & the I Dont Know What

Artist, animal lover and would-be swimming sensation Mimi Power knows what it?s like to live under the tyranny of a three-year-old sister. Things have never been the same in the Power house since “The Waby” arrived. Finding creative space in all the chaos is getting harder by the minute for Mimi.

But with the school art show looming and a prize too-good-to-give-up-on at stake, Mimi comes up with a plan that?s three-year-old foolproof. Or is it? To know for sure, Mimi will have to tap into her big sister power and find her own little piece of the sky.

Mimi’s writing is ironic, exaggerated, and more often than not very funny.  One chapter, “Waby Goes to the Dentist”, made me seriously giggle but contained only one line: “I don’t think I have to tell you how this went.”

Mimi’s favourite pastime is art, although she describes herself as not being very good, and is often unsatisfied with the end result of her work.  She struggles to put what she sees in her minds eye down on paper.  This is made even more difficult by the antics of Waby which constantly distract Mimi and her family.

There is a chapter in the book where Mimi and Dad desperately retrace earlier steps in a frantic effort to find Bunny Jim, Waby’s favourite stuffed animal and constant companion.   This just seemed all too familiar, although more than slightly exaggerated.

Although Mimi describes Waby as being exceedingly annoying, she also shares her love for her sister, which I really enjoyed amongst the humorous 9 year old angst.

I really do recommend this book for the 9-11 year old group, but mom’s this is one you can enjoy too!

Victoria Miles is the award-winning author of Magnifico, Old Mother Bear and numerous other books for children. She lives in North Vancouver, Canada, with her husband, photographer David Nunuk, and two daughters—Emily and Daphne—otherwise known as Waby.