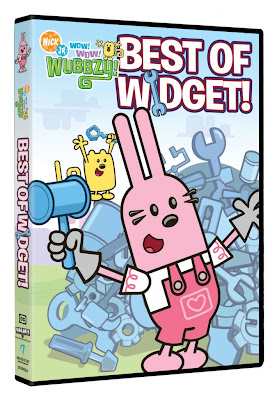 Calling all Wubbzy fans: It’s Wubbzy’s pal Widget’s turn to be in the spotlight!
Since it’s premiere in 2006, Wow! Wow! Wubbzy! has been a hit with preschoolers and families.  Wubbzy and his friends deal with similar social and developmental issues faced by preschoolers.  The top-rated series helps to support social skills through lessons in sharing, listening, compromising, helping and appreciating others, self-awareness and coping skills.
I’m excited to share with you Best Of Widget!, the second fun-packed installment of the “Best of” Wow! Wow! Wubbzy! DVD series from Anchor Bay Entertainment. It features six charming episodes with Widget and his friends – plus a special bonus show.  Little boys and girls alike will love watching Widget – the busiest builder and fix-it whiz in all of Wuzzleburg!
Episodes:
Bonus Episode:
Bonus Features:

I’m a big fan of Wow! Wow! Wubbzy since the colourful animation grabs my little one’s attention and can hold it through an entire 10 minute episode.  How wonderful that The Best of Widget, while 70 minutes in length, is broken down into individual episodes which is a lot easier on a pre-schoolers short attention span!

I really like that beyond being entertaining, I feel like each episode has something good to teach about friendship and social interaction.  I really love that Widget is a girl too since most fix-it type characters are boys (Bob the Builder, Handy Manny) which serves as a great example for both genders – Wow! Wow! Wubbzy doesn’t cater towards being a “girl thing” or a “boy thing”.

Wow! Wow! Wubbzy!  Best of Widget!  is available to purchase from Amazon.com