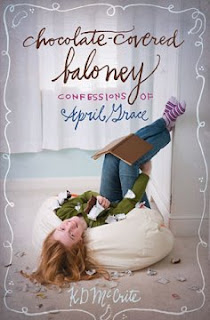 The last thing April Grace wants is more change in her life—but that’s exactly what she gets! Plus, April has a new mystery to solve when Myra Sue starts sneaking around and acting very suspicious!

From snooty new neighbors to starting junior high to getting a new baby brother to having her grandmother get a boyfriend, April Grace has had enough change to last until she is at least 87 years old.

But when it rains, it pours, and April Grace is in for the ride of her life when her prissy, citified neighbor Isabel becomes her gym teacher and a long-lost relative suddenly reappears and throws everything into a tizzy. On top of that, April’s sister, Myra Sue, has been hiding something and sneaking around. April needs to find out what is going on before her silly sister gets herself into trouble again. More important, will April find the grace she needs to handle her topsy-turvy life and forgive past wrongs?

Girls will fall in love with April’s humor and completely relate to her as she deals with family, friends, drama, and both the humor and the heartache that are part of growing up.

I loved the author’s use of voice to write this book, I felt convinced I was actually reading the writing of a (very funny) tween.

For example, “Her hair was a color I have never seen on a real human person….And I believe if you are a million years old, you should not wear mini-skirts.”

Even the Chapter names are full of April Grace’s character “Myra Sue’s Room: The Pit of the World”, “Almost a Civil War in Our Very Own Kitchen”.

One thing some parents may not enjoy is the abundance of insults shared between April Grace and Myra Sue.  I feel though that it was used to display typical sibling rivalry and I think it was true to life.  The author also has a purpose for this, but you’ll just have to read it yourself as I wouldn’t want to spoil the story.

Another facet of this book I enjoyed was the use of multiple conflicts to teach the reader about forgiveness, the importance of family and friends, hospitality and of course to try and see other people in the way that Jesus would.

is available to purchase on Amazon

You can read the first three chapters here.

Disclosure of Material Connection: I received this book free from the publisher through the BookSneeze®.com <http://BookSneeze®.com> book review bloggers program. I was not required to write a positive review. The opinions I have expressed are my own. I am disclosing this in accordance with the Federal Trade Commission’s 16 CFR, Part 255 <http://www.access.gpo.gov/nara/cfr/waisidx_03/16cfr255_03.html> : “Guides Concerning the Use of Endorsements and Testimonials in Advertising.”