Ignorance is not quite Bliss

November is International Prematurity Awareness Month.  Last November I never thought that this cause would become so important to me.  A year ago I was happily pregnant and worrying about what labour would be like.  I had just found out I was carrying a little girl at my 19 week scan (Nov 1st 2011).  I was dreaming of the moment I’d get to hold my daughter for the first time.  I was amazed by every little movement she made from the little kicks to the feeling of her rolling around. It never once occurred to me that anything could go wrong.


On January 5th 2012 at 4 am I got up to use the washroom and when I lay back down in bed I felt the baby moving around in a torrent of kicks.  That was when I felt something like a bubble popping with a small trickle of what felt like urine.  I ran to the washroom and sat down just in time for a giant gush. 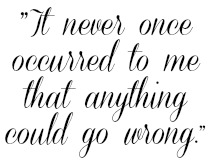 This couldn’t be happening.  Not to me.  I was only 28 weeks along.  I didn’t have my hospital bag packed.  I hadn’t started my prenatal classes.  I hadn’t even registered at the hospital yet. No.  This was just pee.  Right?  So I wiped and started to go back to bed when I felt another gush about to happen.  OK.  Not pee.
In a moment of clarity I grabbed an overnight pad then found the hospital number and the phone and made the call.
I spent 12 hours being monitored in the Labour and Delivery Ward being pumped full of antibiotics, steroids and other medications in an effort to prepare us both for her birth. I was transferred to another ward full of other high risk pregnant women to stay on bed rest until she came.

On January 8th 2012 my partner was visiting and I noticed I was having slight cramps but brushed it off as I was told this could happen and would be normal.  After he left I waddled to the washroom where I was shocked to find I was spotting.  I immediately called a nurse who advised me to just monitor the cramping and bleeding.  When an hour later I found I was bleeding more I was brought to Labour and Delivery for a non-stress test.  An hour later I was told it was all normal and just to go to bed.

Despite my misgivings I was given sleeping pills and so tried to get some rest.  Soon I found I would start dozing off for a few minutes and be woken with strong cramping which began to radiate around my back as well.  Soon it was so bad and often I couldn’t move.  That was enough.  I called the nurse again around 2 am and she gave me Tylenol and told me to give it twenty minutes and see if the pain was relieved.
When this obviously did nothing for me I was brought back to labour and delivery where it was determined I was already 5 cm dilated and she was definitely on her way.
At quarter after eight in the morning the labour and delivery room was swarmed with Drs and nurses prepared for the worst.  This was not the happy moment I had been dreaming of.
At 8:34 am Keira was born and placed on my chest for the first time when, much to my relief, she let out a tiny wail.
My Other Half was able to cut the cord before she was whisked away to be cleaned and looked over and then taken to the neonatal care unit.

She was 1360 grams (3lbs) at birth and spent 4 days on CPAP, a week on and off under the Bili lights, a slight bleed on her brain that cleared up without scarring by the time she was discharged and 54 days total under the care of the NICU (Neonatal Intensive Care Unit).

I had no clue just how her prematurity would affect me.  I was petrified she would not make it.  I was in shock that I had just given birth.  I was upset that I was no longer pregnant.  I was afraid she would have long-lasting health issues.

Worst of all, I felt incredibly alone.  I felt as if nobody around me understood what I was going through despite having a ton of support.

I soon got to know other NICU parents and found I was not the only one with these fears and emotions.  While we were all going through different things we could still all relate to each other.  I don’t know if I could have gotten through it without these friendships born out of circumstance.

In the NICU most parents spent as much time as possible with their babies.  Some spent 12 hours or more a day in the NICU.  Diaper changes were looked forward to by all the parents.  I know this is a task taken for granted by other parents, but preemie parents can tell you just how crushing it feels to return from a quick coffee to find it already done.

Other parents I knew often complained about having to wake up in the night to settle or feed their newborns.  I would say nothing because I knew they wouldn’t understand the feeling of waking up to an alarm throughout the night signalling it was time once again to pump breast-milk.

I have no cute posed newborn photos of her, and there are no shots of us lying blissfully together on her first day.  Instead I have shots taken from outside of her incubator.

That was then, this is now 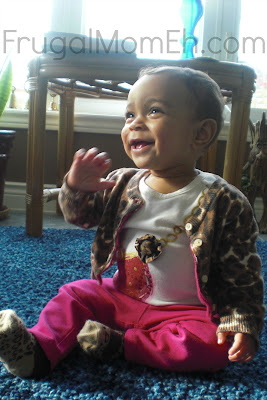 Now at 10 months old Keira is only 13 lbs but doing extremely well for how early she was born.  She was both sitting and crawling at 6 months adjusted.  She rolled for the first time before she even reached term – and did not ever stop that trick!  She is hitting all her milestones so far and is healthy and perfect in every way.

Unfortunately not every story has such a happy ending.  Many preemies never make it home or even past their first day of life.  Some families have won the preemie battle, some have lost and some have seen both sides. No matter the ending, the preemie experience is not an easy one.Most preemies do not thrive in the way Keira has, and we know just how blessed we are that she is the exception to the rule when it comes to preemies and development.  Things could have been and should have been much worse for her.

If you are pregnant make sure you know the risks and signs of premature labour, and don’t be like me… don’t just brush it off thinking it can’t happen to you.

Other Preemie Blog Posts to Check Out

I’ve teamed up with a few other awesome bloggers to help spread prematurity awareness in November.  Check out what they had to share about prematurity!

Prematurity Awareness: What It’s Really Like To Have a Preemie

(Some) Things You Need to Know About Preemies