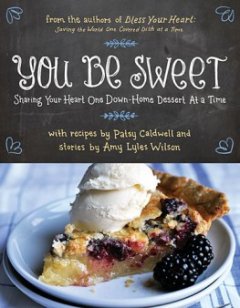 Sharing Your Heart One Down-Home Dessert at a Time

You know how those Southern dessert recipes go—a cup of sugar here, a stick of butter there, eight squares of bak­ing chocolate, or a pint of the season’s juiciest fruit. That recipe for blueberry cream pie—it’s been passed around the church for so long nobody can quite remember who made it first. Or how about the one for red velvet cheesecake you’ve been trying to coax out of your sister-in-law for years? She serves it every Christmas Eve, but so far her lips are sealed.

These are the types of food traditions that inspire You Be Sweet—a celebration of Southern dessert recipes and the people who cherish them. In this compilation of stories and sweet treats, Patsy Caldwell and Amy Lyles Wilson peek in on those occasions special enough to demand something decadent, and memorable enough to be repeated time and again. You’ll find the strawberry jam bars that always make an appearance at the neighborhood picnic. The German chocolate cake roll that pulls in the big bucks at the charity bake sale? That’s here too. The blackberry jelly recipe that has graced Mason jars all over the South for decades? It’s here, and it’s just about the best hostess gift you can offer up. Be sweet? You won’t be able to help it!

I was so excited to receive this cookbook in the mail to review that I immediately began to read through it.  The first thing that struck me was just how nicely this book was put together – from the inviting dustcover right down to the quality of the paper inside.  They have also included a fair number of full colour photographs of the finished desserts.

The recipes are divided by chapters with a short story of “down south” included at the beginning of each chapter.  As if the recipes full of sugar, butter and pecans weren’t enough to immerse you in the culture of southern cooking!  A special favourite was chapter threes delightful tale of Virgina and her secret no-rum Rum Punch.

Most recipes are captioned with short anecdotes regarding the recipe.  I truly enjoyed the caption for the “Old Fashioned Southern Chess Pie”; Legend has it that chess pie got its name because when people would ask someone what kind of pie it was, they would reply, “just pie”…Over the years its name became “Jess Pie,” which eventually became “Chess Pie.”

The Index was also well written and easy to use thanks to it being cross-referenced.  So, yes, you can find that Banana Butterscotch Bread under Banana’s, Bread as well as under Butterscotch!

My one, minor, complaint is about how the directions are written for each recipe.   I found they were not spaced properly enough to be able to follow along while baking.  You really have to sit there and read to get to the next instruction which can make it difficult if you are stirring two pots at the same time while making that Iron Skillet Caramel Pie! 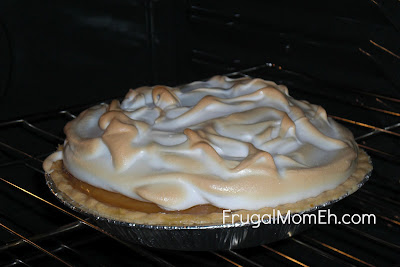 I wanted to test a few of the recipes right away to get a good feel for the book.  After bookmarking a few I was really interested in trying, such as the Red Velvet Cheesecake, Pear Pie with Cheddar Cheese Pastry and Iron Skillet Caramel Pie; I got down to work.

The Iron skillet Caramel Pie sounded odd and a tad bit too sweet for my tastes but was labeled by the author stating “I would choose this to be the last dessert I eat on this earth.”  I knew right away that this would be one to share in my review of the cookbook as it definitely encompassed southern cooking in all its glory.   I was right, it was way too sweet for my tastes and quite rich but it would be a perfect treat for a sweet-tooth.

I would recommend this book to anyone interested in sweet treats with a southern twist.

is available Sept 18th to order on Amazon.ca.

Disclosure of Material Connection: I received this book free from the publisher through the BookSneeze®.com <http://BookSneeze®.com> book review bloggers program. I was not required to write a positive review. The opinions I have expressed are my own. I am disclosing this in accordance with the Federal Trade Commission’s 16 CFR, Part 255 <http://www.access.gpo.gov/nara/cfr/waisidx_03/16cfr255_03.html> : “Guides Concerning the Use of Endorsements and Testimonials in Advertising.”